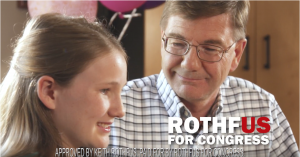 “I wasn’t sure if I’d see her 5th birthday,” Rothfus, referring to one of his children, says in the ad as candles were blown out. “I was diagnosed with a rare deadly cancer, one month before my 6th child was born, but with skilled doctors and God’s grace, I survived.”

“Every breath is a gift,” Rothfus says in the ad. “That’s why I’m fighting to make healthcare affordable with more choices, while protecting those with pre-existing conditions, because I know life is precious. It’s not about counting the years, it’s making them count.”

The three term incumbent facing Rep. Conor Lamb (D-Allegheny) did not mention his opponent or the Affordable Care Act by name in the ad, but a press release from the Rothfus campaign takes shots at Obamacare.

“Our country, and especially this Congressional District, is home to some of the greatest doctors in the world, like the ones who helped me when I battled cancer,” Rothfus said in the press release. “Unfortunately, under Obamacare insurance rates have drastically increased and become unaffordable for hardworking families.”

In the press release, Rothfus explains specific ways in which he believes will help counter higher health insurance costs, while vouching for covering preexisting condition. During Lamb’s upset victory in the March special election for Pennsylvania’s 18th Congressional District, he stressed affordable healthcare as a part of his platform.

“The Affordable Care Act has flaws, but it has provided affordable coverage to more than a million Pennsylvanians who were previously uninsured,” Lamb states on his campaign’s website. “I’ll work with anyone from either party who wants to help people with pre-existing conditions, improve the quality of care, and reduce premiums, out-of-pocket costs, and prescription drug prices.”

The Lamb campaign did not immediately respond for comment for this story.