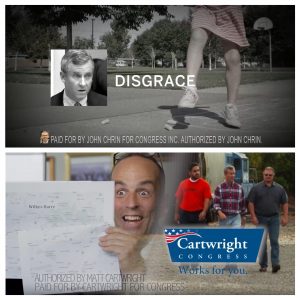 “This is what it’s going to cost you to buy a seat in New Jersey or Pennsylvania,” says an actor playing the role as an assistant to Chrin showing a bar graph.

“Our first ad successfully defined John Chrin’s residency and career, and we’ve seen the results,” said Cartwright campaign spokesman Mike Szustak. “Our message is getting through, and the Chrin campaign is growing increasingly negative and desperate as they struggle to gain traction.”

In multiple ads, the Cartwright campaign has tried to pin Chrin as an outsider to the district. The end of this ad has one of the actors playing the role of an assistant mispronouncing Wilkes-Barre.

“Chrin is simply out-of-touch with the district, and adding a sense of humor will further cement the conclusion that he is a Wall Street banker from New Jersey who wrongly thought he could buy a seat in Congress,” Szustak said. “It’s going to be hard for Chrin to shake those labels now.”

The Chrin campaign did not find the humor in the most recent ad.

“Matt Cartwright’s ad is a joke,” says Michael Stwarka, Communications Director for Chrin’s campaign. “Cartwright wants to divert attention from the fact he voted with Nancy Pelosi and the radical left for sanctuary cities, amnesty for illegals, and job killing tax increases. The voters of Northeast Pennsylvania care about issues, not jokes.”

“A five year old girl raped by an illegal, given sanctuary in Philadelphia,” a voiceover says during the ad as a girl is playing hopscotch. “Matt Cartwright supports sanctuary cities and voted to give illegals amnesty.”

The Chrin campaign has consistently attempted to paint their Democratic opponent as beholden to Nancy Pelosi and the progressive wing in the party in favor of sanctuary cities.

The Cartwright campaign sees the attack ad as a sign of desperation from Chrin.

“It’s early in the game, but the Chrin campaign already looks desperate, releasing a hideous ad built on lies and filled with rabid viciousness,” said Szustak. “Here in Northeastern PA, we don’t have sanctuary cities, but we do have a Congressman who balances the rule of law with the needs of our law enforcement community. Congressman Cartwright has been a strong leader on immigration issues and will continue to push to reform our broken system and protect our borders.”