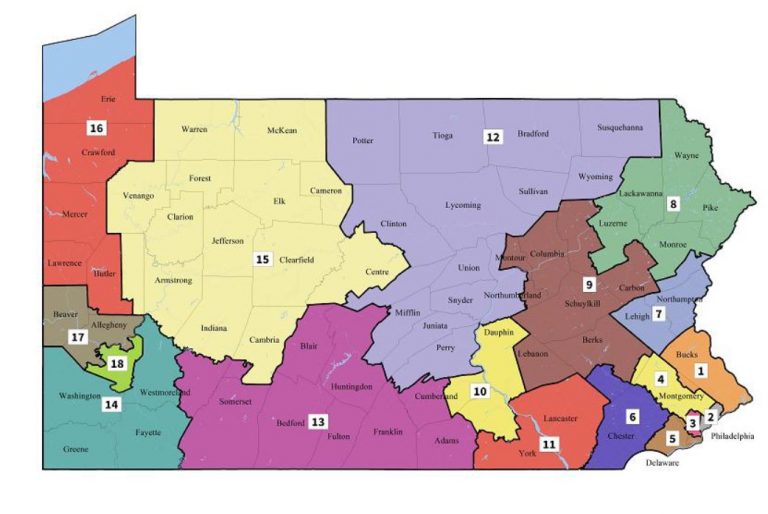 Despite upheaval from the coronavirus and protests over policing, the outlook for Pennsylvania’s congressional races hasn’t changed that much since we last rated them on July 24.

In PoliticsPA’s latest congressional vulnerability rankings – the sixth cycle in which we’ve made these lists – the order of most vulnerable U.S. House seats remains essentially the same.

As was the case in July, our Vulnerable category consists of four races. In declining order of vulnerability, they are the seats held by GOP Rep. Scott Perry, Democratic Rep. Matt Cartwright, GOP Rep. Brian Fitzpatrick, and Democratic Rep. Conor Lamb.

Here’s the full list. Districts not cited here are not considered vulnerable for the party that holds them.

This race remains tight and a clear No. 1 on our list. Perry is a four-term House member and Iraq War veteran who won by less than 3 points in 2018. He faces a prize Democratic recruit, state auditor general Eugene DePasquale, who won the current district in his auditor race even as Donald Trump was carrying it in 2016. Both candidates and their parties are dumping money into the inexpensive media market. In these ads and in his candidate appearances, Perry is reinforcing national Republican themes like fighting socialism, while DePasquale is playing up his service as a government watchdog. Recent partisan polls have found the contest within a couple of points.

Cartwright represents a district that supported Trump in 2016 by nine points. The GOP primary winner, with just 28%, was Jim Bognet, a former Trump administration official and onetime aide to former Sen. Rick Santorum and former Rep. Lou Barletta. While he came out of the primary with far less cash on hand than Cartwright did, Bognet garnered attention for an odd stunt: He aired a TV ad thousands of miles away in Portland, Ore., the site of unrest over police brutality. “Good evening Portland. I’ve heard you’ve been having a few issues,” Bognet says, later adding, “Consider Northeast PA. We’re all about Made in America.” Bognet closed the ad with a bleeped profanity. The Republican has also accused Cartwright of approving of defunding the police, a claim that Cartwright denies and that was debunked by fact-checkers. While the district’s blue-collar demographics are favorable to Trump, Cartwright is hoping that Biden, a Scranton native, will provide a boost. The two are set to appear in one debate, four less than Bognet had proposed.

In 2018, Fitzpatrick was one of just three Republicans nationally to survive in a House district won by Hillary Clinton. This year he faces Ivyland Borough Councilwoman Christina Finello, and the incumbent’s position seems to have improved during the past two months. He’s sided with Democrats on several votes that may make Biden voters more comfortable backing him, including a police reform bill passed by the House after the police killing of George Floyd in Minneapolis; Fitzpatrick was one of only three House Republicans to support it. In addition, the AFL-CIO endorsed Fitzpatrick, one of just a handful of endorsements by the labor group on behalf of GOP candidates nationally. Finello, a former senior official in the Bucks County Department of Housing and Human Services, is countering by criticizing Fitzpatrick’s vote against the Heroes Act, a coronavirus relief bill passed by the House in May that is now stalled in the Republican-controlled Senate. Finello remains far less known in the district than Fitzpatrick, who succeeded his brother Mike in the congressional seat, and the most recent fundraising reports showed Finello trailing in cash on hand. Two recent polls showed Fitzpatrick with a double-digit lead. At this point, she’ll need to ride a Biden wave in the Philadelphia suburbs. The two will debate on Oct. 12.

Lamb won a strongly Republican district in southwestern Pennsylvania in a 2018 special election, then ousted Republican Rep. Keith Rothfus in November in a different district that was more favorable to the Democrats. Both Lamb and his opponent, former Army Ranger and author Sean Parnell, received national exposure over the summer thanks to their respective parties’ conventions. Lamb was one of 17 “rising star” Democrats to deliver a collective keynote address, while Parnell got a solo speaking slot in which he strongly backed the president and shared how his military service exposed him to diverse groups of Americans. (Both candidates have military service; Lamb served in the Marines.) Parnell continues to tie Lamb to national Democrats who would like to curb energy development, which is a potent issue in some portions of the district. But Lamb has positioned himself as taking a middle-ground approach on energy, which could play better in more suburban, blue-trending areas. Thanks to frequent exposure on Fox News and in-person endorsements by Trump, Parnell has put up some impressive fundraising numbers, though Lamb led in cash on hand in his last report. In early September, a Republican pollster found the race within the margin of error.

Wild, who won an open seat in this competitive district in 2018, faces Lisa Scheller, a businesswoman and Lehigh County Commission chair who narrowly won the GOP primary. Scheller is a conservative who runs a family manufacturing business; she’s also a former heroin addict who’s been in recovery for almost four decades. Wild had more than $2 million in the bank at the end of June, and she’s hoping for a boost from Biden in eastern Pennsylvania. Scheller aired an ad accusing Wild of sponsoring a bill to give “millions of taxpayer dollars to her own political campaign,” but fact-checkers found that misleading. The candidates will hold at least three debates and possibly a fourth before Election Day.

In a surprisingly competitive race in 2018, Kelly held off Democrat Ron DiNicola by about 4 points, even though Trump won the district in 2016 by 20 points. Kelly has a history of controversial comments and could be vulnerable, but the Democrats have an untested nominee in teacher and cancer survivor Kristy Gnibus. Gnibus’ underfunded campaign against a long-serving incumbent can likely only succeed if there’s a Biden wave in the district, and the likelihood of that remains uncertain at best.

Smucker reported having just $481,000 in the bank at the end of June, barely any higher than it was six months earlier, and that isn’t much for an incumbent. But his opponent, field hockey coach Sarah Hammond, reported having barely over $2,000 on hand, and she’s coming off losses for state House in 2018 and state Senate in 2019. Moreover, Hammond is advocating single-payer health care, the Green New Deal, and student loan forgiveness, left-leaning policies that will be an extremely hard sell in a heavily Trump district.