Philly Leaders to Pitch DNC for Convention During Tour 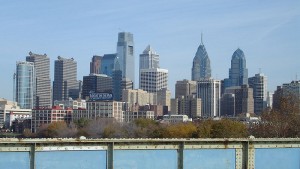 Whether it’s Hillary Clinton, Joe Biden, or a darkhorse candidate, someone will emerge in 2016 as the Democratic nominee for president. And their victory party could be in Philadelphia.

The City of Brotherly Love is one of four cities vying to host the 2016 Democratic National Convention. The other contenders are Brooklyn, New York; Birmingham, Alabama; Columbus, Ohio; and Phoenix, Arizona.

“We get behind efforts like this because we love our city and we’re proud of all the things we have. Now I understand the five contenders are Birmingham, Alabama, Phoenix, Arizona, Columbus, Ohio, Brooklyn, New York, and Philadelphia,” Rendell said. “And they are all great cities, and we don’t want to disparage any of them, but we believe we are the best.”

Of course, the officials wanted to hear about the logistics and costs of holding the convention in Philadelphia. Nutter stated that the city has already raised $1 million for the bid to host the event.

“There’s the bid phase, we’re in that now,” Nutter said. “If and when you win, then you launch into, of course, a much larger phase. But we’re in the bid phase now, and certainly well into getting the dollars we need for that.”

Nutter went on to explain the topics discussed during the meetings with the Democratic Party officials.

“Obviously, we are going to show them a really really good time, but they want to know about logistics,” he said. “They want to know about buses, about how you get to the venue, and how walkable and how easy it is to get around Philadelphia — and the historic things that are here you can’t see anywhere else.”

If Philadelphia is chosen, it will be the first time the city has held a convention since the 2000 Republican National Convention.