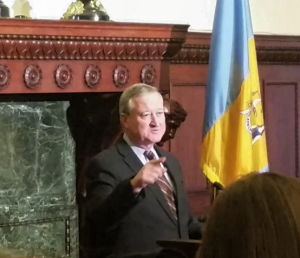 Just over a week after he resigned from City Council, former Democratic Councilman-at-Large Jim Kenney made a much expected statement to the media and the city.

In a room of a few hundred supporters at City Hall, he announced his candidacy for Mayor of Philadelphia.

“There is no silver bullet, there is no superman from Harrisburg,” Kenney said.

“Improving our public schools, our city finances, our infrastructure, and our public safety will all take time and patience. Make no mistake, Philadelphia has the grit to get it done – but we will need to come together and become more self-reliant and more independent than ever before.”

Kenney noted that his vision for Philadelphia relies on the cohesive action of a diverse city to reach the lofty goal. He stressed the need to ‘encourage each other’ and put an end to the ‘Philly shrug,’ which he described as the easy way out in a time of adversity. Kenney aims to build a sense of community and transform Philadelphia into a ‘can-do city.’

The former Councilman made clear the importance of schools as the ‘centerpiece of activity’ in a neighborhood.

“If elected Mayor, I will work hand in hand with city departments, community organizations, universities, and non-profits to collaborate and transform these schools into true neighborhood centers for community activity,” Kenney said.

“Schools need to be something we’re proud of again.”

But Kenney didn’t stop at that. He underlined a clear-cut goal of improving education from the ground floor.

“My administration will partner with universities and businesses and, over five years, we will fund Pre-K for every three and 4 year-old in need,” Kenney said.

On the issues of jobs and the economy, Kenney didn’t have specifics laid out. Instead, he emphasized that a great deal of Philadelphians don’t have the skills required to enter the current economy. He believes there is a need to tailor community college education around the current job climate as to better fit students and employers.

Kenney, however, also addressed improving the lives of those who are already employed.

“As mayor, my administration will listen to employers, listen to people looking for work, and align their goals. That includes fighting for things like a real living wage, and earned sick leave,” Kenney said. 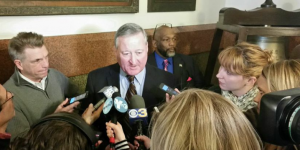 In his Mayoral coming out party, Kenney seemed to have his focus on a grassroots operation. The word ‘neighborhood’ was used frequently. ‘Working together,’ ‘giving back to the community,’ and ‘looking out for one another’ was his message.

Kenney’s childhood was based on the community of his South Philadelphia neighborhood.

“The neighborhood I grew up in was a typical South Philadelphia neighborhood,” Kenney explained.

“A typical rowhouse neighborhood you see in South Philly and around different parts of the city, very small streets, 72 houses pushed together, no trees, kids who ran from sun up to the time the lights went on in the streets and you knew you had to be home.”