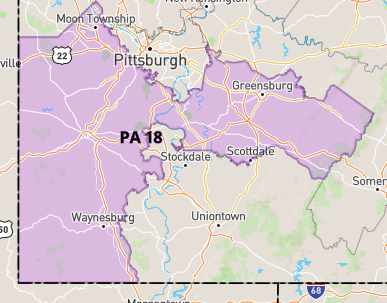 On March 13, a special election will be held in Pennsylvania’s 18th Congressional District, with Republican Rick Saccone opposing Democrat Connor Lamb. Libertarian candidate Drew Miller is also on the ballot. It is an especially convoluted special election since the winner will need to also run two months later in the May 15th primary to be nominated by his party – and then again in the November general election when the seat’s regular term expires.
But three elections across some eight months might be one of the more unexceptional aspects of this contest.

Earlier this month, we asked whether Republicans need to worry about the outcome of this election. Trump won this district by 20 points in 2016 and the previous GOP incumbent, the now disgraced Tim Murphy, regularly prevailed with 60 percent of the vote when he had an opponent. A Republican loss in such a historically loyal district would loom ominously for the party going into an uncertain midterm election.

That particular question has now been answered. Republicans are worried – very worried – and they are assembling an enormous arsenal of political resources committed to keeping the seat safely Republican.

Even a narrow victory will spare the GOP the ignominy of losing the seat, but Republicans are really aiming for an impressive margin of victory, enough to belie the dire predictions the party faces a “wave” rejection by the voters in November’s upcoming mid-term elections.

A win in the 18th for the GOP isn’t enough. To stave off the panic of a mid-term debacle, Republicans want a big win and they are doing everything possible to get it.

President Trump has already visited the district once and indicated he will return before Election Day. Vice President Pence plans at least one trip this month while other high profile Republican surrogates will appear.

Meanwhile, financial resources are pouring in. The Congressional Leadership Fund (CLF), Speaker Paul Ryan’s “super PAC,” is staffing a massive “get-out-the-vote” effort aimed at contacting a quarter-million homes. CLF has already set up two campaign offices in the district. Separately, the Republican National Committee (RNC) is planning its own voter outreach campaign.
Adding to these plans, the PAC “Ending Spending,” a so called “dark money” group, has pledged a million-dollar media buy, while outside “independent” groups like the “45 committee” are also active, the latter expecting to spend a half-a-million on voter communications.

And this is the “early money.” Republicans will spend whatever they think it will take to win the Pennsylvania 18th. The proverbial kitchen sink may not make it onto the pile. If not, it will be because it wasn’t needed.

But if this one ends up being a gunfight, both sides are going to need a gun. And right now it isn’t clear Democrats are ready to answer the Republican largess with some largess of their own. Superior political resources, including cash, don’t guarantee winning, but a lack of such resources guarantees defeat.

Thus far Democrat sources have given sparse indication they can or will match Republican resources. One major Democratic PAC plans to be active, but other national groups have been mostly uninvolved.

Certainly, Democrats have some reason to be cautious about committing resources. They did not win the special congressional elections held last year, even though they performed much better than expected so far in the Trump era – excluding the notorious Alabama Senate contest. Moreover, neither candidate has moved the needle very much with their personal financing efforts, leaving outside groups to primarily finance the campaign.

Then, too, Democrats do enjoy some significant advantages from the prevailing mood that is clearly trending toward them. Last Tuesday, they won a surprising state senate upset in Wisconsin by 10 points in a district Trump had won in 2016 by 17. Indeed, some political analysts are even questioning whether it is a smart tactic to bring President Trump in to campaign since his popularity has dropped precipitously since the 2016 presidential election.

Nevertheless, Democrats are climbing a steep hill trying to win in this heretofore solidly Republican and enthusiastically Trump district. To win they need the right candidate with the right message and they probably have that.

What they appear not to have are the resources – the money and manpower – Republicans are committing to the race. Without them it may still be a close race, but one that Republicans likely to win. Controversial businessman/lobbyist Jack Abramoff famously remarked “you can’t beat somebody with nobody,” In the Pennsylvania18th Match special election it should: be: “you can’t beat nobody with nothing.”

Republican’s seem to understand that. It is not clear that Democrats do.