Politically Uncorrected: All Over Again 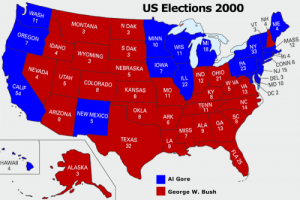 It’s Déjà vu. And yes the immortal Yogi Berra would say “all over again.”

But this time, there’s not much funny about it. The hard fought, tersely tight 2012 presidential election looks more and more like a contest that could end with one candidate winning the popular vote while the other wins the electoral vote. Our deeply divided and sharply polarized nation might witness the second Electoral College misfire in the last four presidential elections–misfire defined here as awarding the presidency to the candidate who lost the popular vote. That nightmare scenario could be politically destabilizing in a nation so politically fractured.

In 2000 when this last happened, national politics were relatively stable. Indeed, the 2000 Electoral College popular vote split inspired much of the deep animosities now so redolent in contemporary politics. Nor is an Electoral College misfire the end of it or even the worst of it. The combination of a razor thin tight election compounded by new tougher and controversial voter ID laws means that at least six key states, possibly more, could end up election night without a clear winner.

The 2000 Florida voter imbroglio might be retrospectively remembered as a mild dust up compared to the chaos that would erupt if the popular vote is thwarted for the second time in 12 years–accompanied by vote recounts in a half dozen or more key states. Some are even warning of a disastrous 269-269 tie in the Electoral College resulting in the election of the next president by the House of Representatives.

And this time it seems unlikely that the US Supreme Court would rush into the breach and resolve any electoral controversies. The battering absorbed by that august institution in 2000 serves as a cautionary tale for any hasty intervention by the Court.

Nothing yet is inevitable, nor can any of these situations be ruled out. In fact, some kind of electoral disaster looms chillingly possible. Current polls and much expert opinion forecast an unusually close election, with a large number of states likely decided by relatively few votes. This is precisely the electoral scenario most likely to produce a split between the electoral and popular vote. This mathematical probability actually increases because of two campaign dynamics not likely to change in the last two weeks before Election Day.

One of these is Obama’s likely underperformance among some key voter groups who favor him: Hispanics, younger voters, and women. Hispanics and young voters seem far less motivated to vote this year, and Obama looks like he will fall short of the majorities he won among them four years ago. His eroding support among women in large part explains the tightening of the contest since the first debate. The ongoing defection of these key groups conceivably makes it hard for Obama to beat Romney in the popular vote.

The fly in the ointment, however, for Romney is that Obama still has small leads in a number of battleground states. If Romney wins Florida, North Carolina, and Virginia which now seem likely, he still needs Ohio or Pennsylvania which seem less likely. And if Obama defeats Romney in those large electoral vote states, Romney will then need some combination of several of the other swing states: Wisconsin, New Hampshire, Colorado Nevada, and Iowa to win the Electoral College. In short, a Romney popular vote victory has the ring of a real possibility while Obama seems better positioned to win in the Electoral College.

If the Electoral College misfires in 2012 will it matter? That question asked just twelve years ago answered itself. Then, almost everyone expected a national crisis. But it didn’t happen. Certainly, there were some tense moments as the nation collectively held its breath through the agonizing Florida recount and the controversial deliberation of the divided Supreme Court that ended the contentious recount.

But despite the bitterness over the outcome, no serious effort to change the constitution or fashion a legislative remedy was undertaken. Even more puzzling, there was no national dialogue about the institutional arrangements that produced an election in which most Americans voted for the loser.

What if it happens again in 2012? What if an Electoral College misfire re-elects an embattled and controversial president in the current contentious environment?
In truth, no one knows. It could produce another relatively quick, relatively peaceful accommodation as in 2000. Or it might produce a genuine political crisis as did some earlier Electoral College misfires.

What does seem all but certain is that the American people will not tolerate another election in which the popular vote winner loses the election–without demanding reform or abolishment of the Electoral College. If this happens, we will have paid a huge price to do something we should have done long ago.