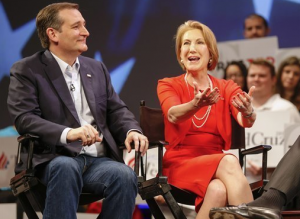 The New York Times referred to it as “the political equivalent of a student pulling a fire alarm to avoid an exam.”

Ted Cruz’s naming of Carly Fiorina as his “running mate” underwhelmed most of the political world.

But are they wrong?

Has Cruz actually pulled a political rabbit out of his hat, finally finding a way to stop Trump, and buy himself a ticket to Cleveland and a contested convention? Is a Cruz-Fiorina ticket the magic bullet anguished Republican leaders have been searching for to stop Trump?

It is true that Fiorina could help Cruz by reminding women voters of Trump’s many misogynistic remarks. She after all was the object of some of them; remember Trump’s comments about her face. Fiorina might be of some help in California, her home state. And Fiorina is a solid conservative like Cruz himself, certainly a plus with the Cruz base.

Furthermore, in picking Fiorina, Cruz selected someone whose positions on the major issues are more similar than dissimilar to his own. But she is not likely to help him very much in Indiana. After a shining moment in one debate, she dropped out after the New Hampshire primary, and captured a single delegate in the Iowa caucuses.

But, none of this is going to matter. Ted Cruz, now mathematically eliminated from winning the nomination outright, isn’t going to win the nomination any other way. He will still lose. Trump will still win. And naming a running mate or any other last minute Hail Mary’s he attempts will change none of it.

However, it’s not Cruz’s tactic that is defective; it’s his timing. If he had done this a month or two months ago, it might have worked – albeit perhaps not Fiorina, whose few plusses outweigh her multiple minuses.

Cruz’s 2016 tactic is neither new nor unique. In fact, Republican Ronald Reagan pioneered it forty years ago. In 1976, when incumbent president Gerald Ford was closing in on the nomination, Ronald Reagan made a bold move to stop Ford.

Dramatically breaking with political tradition, he selected his vice presidential running mate before the convention. To sway uncommitted northern delegates, he selected Pennsylvania Senator Richard Schweiker, a member of the moderate wing of his party.

Reagan’s tactic did not work in 1976 for many good reasons. One was that he was running against an incumbent president for the nomination, almost always unsuccessful in American politics.

Reagan had inherited the GOP’s Barry Goldwater conservative mantle. But, his early selection of Schweiker brought about an unexpected backlash among many Republican conservatives – especially those from the south.

Schweiker had voted numerous times to override Nixon’s vetoes and he had opposed two of the president’s Supreme Court nominees. His voting record made the Pennsylvania senator unacceptable to many conservatives.

A Cruz-Rubio or even a Cruz-Kasich ticket could have had a transformative impact on the nomination fight, stopping Trump earlier in the contest. Then, his support ceiling was rarely above 35 percent and his delegate count was far short of the 1,237 needed to nominate him.

Moreover, Trump has had huge polling “negatives” averaging higher than 60 percent in most polls. Indeed, about 30 percent of Republicans said they would not vote for him under any circumstances. It was this large number of anti-Trump voters that created Trump’s ceiling, as well as made a fusion ticket of his rivals viable.

Instead, Trump picked them off, one by one.

Finally, Cruz has offered such a fusion ticket. But it is too little and it is too late.

Cruz’s last minute move is rightly seen now as an act of desperation, a last stand from an embattled candidate – the Texan Cruz staging his own personal Alamo.

In fairness, once Trump swept all five April 26th northeastern primaries, Cruz was left with only bad choices. He made the one that made the most sense to him. Arguably, there were worse things he could have done. But when the choices are bad and worse, it hardly matters.

The tragedy for Cruz and the still formidable number of Republicans worried about Trump is almost palpable: a fusion ticket might have worked earlier when there was still time.

For Cruz and for them, time has run out.