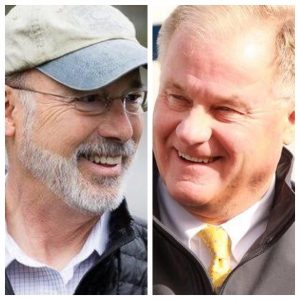 Democratic incumbent Tom Wolf is running against Republican challenger Scott Wagner for Pennsylvania governor. With
the traditional Labor Day start of the campaign, we feel we should say something interesting about it.

The problem is there isn’t much interesting to say so far.

There should be. Both candidates are successful businessmen with significant accomplishments and important things to talk about.

And Pennsylvania certainly has some urgent policy issues to discuss.

The gubernatorial candidates just aren’t talking about them.

Yes, Wolf, the Democratic incumbent is leading in the early polls – by double digits according to the RealClearPolitics average. And thanks to the state’s notorious gubernatorial lottery, AKA, the Lieutenant Governor primary, he has ended up with a colorful, if idiosyncratic running mate, the mayor of Braddock. Otherwise, Wolf hasn’t said or done much to hasten the pulse of would be voters.

Wagner, on the other hand, does keep raising pulses a little, but mostly by saying or doing inappropriate things that surprise or dismay some of his own supporters. Personality wise, Wolf could be a lot more exciting while Wagner might be a little less.

Policy discussions have been all but absent in the campaign so far – while the individual peccadilloes of both candidates have received disproportionate attention. The closest thing to a real policy debate has featured both candidates making maladroit comments that have confused voters about education funding formulas.

Consequently, this campaign has mostly centered upon which candidate is richest (or poorest), which is smartest (or dumbest), which is the better businessman (or worse), and which comes from the most (or least) privileged background.

At least one Harrisburg columnist has suggested both candidates could be “positioned,” according to their name or job:  incumbent Wolf becomes “Wolfpack” while challenger Wagner gets the moniker “Garbageman.” Both efforts at political whimsy reflect the level of discourse so far.

So far Governor Wolf seems determined to keep things at the current fever pitch of excitement by limiting campaign debates to a single one – moderated by game show host Alex Trebek.

Tapping the host of Jeopardy to moderate  a solitary campaign debate seems appropriate since both candidates now seem in jeopardy of putting the voters of Pennsylvania to sleep–while these same sleepy voters seems in even greater jeopardy of waking up too late to know an election is happening.

Candidly, Wolf may be running an uninspiring campaign but Wagner isn’t a great candidate either. (So far, he has threatened gays, angered labor, and publicly, albeit jocularly, suggested the Russians will help him against Wolf). The polls reflect this performance and as does Wagner’s anemic fundraising.

Wolf, however, is not making things better. His lackluster campaign is the kind of campaign that incumbents with large leads often run,  traveling around the state handing out the state’s largess, while counting on a big Democratic turnout in November to insure his victory. His strategy is to ignore that there is a contest, implying there are no great issues to resolve, no great problems to solve.

Alas, the problems are too real, the issues are too clear and the stakes are too high – even if neither candidate raises them.  Here is just a sample:

The many urgent issues confronting Pennsylvania go on; the candidates unfortunately do not.

At this critical juncture in our state and national politics, Pennsylvania needs and deserves a full, robust and serious gubernatorial debate on the issues confronting it.  Wolf and Wagner are not perfect candidates, nor is our state in perfect shape or our electorate perfectly informed.

That is why we schedule gubernatorial election campaigns.

Right now, we are not getting one.