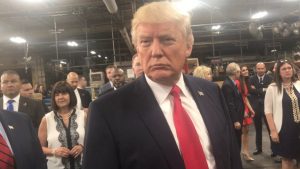 His critics’ call for removal grows more strident each day. His poll approval rating (at 36 percent) in one recent major poll has plummeted to an historical low this early in his tenure.  A recent Monmouth University survey reported that 41 percent of respondents support impeachment – a shocking number for this early in a presidential term. Clearly, President Trump is in trouble, but exactly how much trouble is far from clear.

Some betting markets are putting the probability as high as 50 percent that he won’t complete his full term in office. Indeed, there is increasing speculation that he will be removed by invoking the 25th amendment. More specifically, removed by Section 4 of that amendment – using a little known, never used provision requiring the vice president and a majority of the cabinet to declare the incumbent president unfit to continue in office.

Meanwhile, speculation about impeachment is gaining momentum.  Already Congressman Brad Sherman, a California Democrat, has introduced impeachment articles in the House. These argue that Trump committed obstruction of justice by firing FBI director James Comey in order to quash the ongoing Russian investigation.

But all of this may be doomed to failure.

Hope that Trump can be removed via the 25th amendment seems little more than wishful thinking. Removing a president under the 25th amendment is an unwieldy, arcane and ambiguous process abounding in uncertainties. In addition, actually invoking it would require Trump’s own vice president and his cabinet to turn against him. That just isn’t going to happen.

Similarly, believing that Trump will be impeached and removed from office is the triumph of hope over experience. Although two presidents have been impeached (Johnson in 1868 and Clinton in 1999), neither was removed (convicted in the Senate) from office.  Nixon resigned in 1974 as a consequence of the impeachment process, but he was actually never formally impeached.

Moreover, history argues persuasively that no president is likely to face impeachment so early in his first term. In fact, Trump’s continuing deep partisan support among rank and file Republican voters makes impeachment politically implausible. Some polls suggest that up to 85 percent of GOP voters still back Trump, many fiercely.

So if the 25th amendment is a blind alley and impeachment not a political reality, Trump is going to remain in office for at least four years – and all Trump opponents need to accept that.

But there is a different view.

It posits two factors that might bring him down – and sooner rather than later. The first is Trump himself. The second is the nature of his support.

Trump’s controversial conduct in office is likely to continue – indeed likely to become more controversial. What now inoculates him from the consequences of his behavior is the intense support he retains from his base – hardcore GOP voters that helped elect him and continue to believe in him.

But what happens if that support weakens – or even collapses? In that event impeachment goes from a distinct improbability to a daunting probability. Nate Silver of FiveThirtyEight has set the scenario for that happening.

“…if Republicans get clobbered in the midterms after two years of trying to defend Trump, the Republican agenda is in shambles, Democrats begin impeachment proceedings … and just enough Republicans decide that Pence … gives them a better shot to avoid total annihilation in 2020.”

This would be a GOP doomsday scenario for sure. But American midterm elections have become a referendum on the president – and increasingly, Democrats are framing the issue of impeachment in the context of the fast approaching 2018 election.

To retake control of Congress, Democrats need to win 24 seats in the House and three in the Senate. These are challenging but not overwhelming gains in a mid-term year.

2018 would be a presidential election without the president on the ballot-an election cycle in which voters are asked to cast ballots for or against congressional candidates on whether they favor or oppose the impeachment of the chief executive.

Will this actually happen? Will we see an historic 2018-midterm election that turns on the question of impeachment –in effect a referendum on Trump?

As President Trump’s approval rating continues to fall and the proportion of voters supporting impeachment continues to rise, the prospect of impeachment looms more likely. The closer we approach the factors enumerated by Nate Silver: a midterm loss for Republicans; a GOP agenda in disarray; and a belief that a “President Pence” could avoid calamity in 2020; the more inevitable impeachment becomes.

Against this is the history of impeachment, the fact that it has been rarely used and never led to the removal of the president by a conviction in the Senate.

Nor should we forget the Democrats sorry record of repeatedly snatching victory from the waiting jaws of defeat. Trump’s weakness does not make Democrats strong; Trumps missteps do not make Democrats surer footed.
Instead, Democrats need to produce a coherent agenda while simultaneously finding a way to appeal to the Trump voters that so overwhelmingly rejected them in 2016.

Democrats understand what must be done – but do they know how to do it?