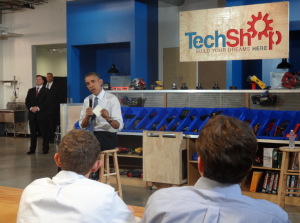 President Obama made a stop in Pittsburgh yesterday afternoon to talk to the employees and members of TechShop, a company that allows community members to pay a monthly fee in return for the use of more than one million dollars worth of production equipment it owns, about the future of the economy, specifically regarding the manufacturing jobs that many of them either possess or desire.

Mayor Bill Peduto, Senator Bob Casey, and Allegheny County Executive Rich Fitzgerald were all in attendance. Democratic gubernatorial nominee Tom Wolf was absent – his campaign told PoliticsPA he had previous commitments in central PA – and no mention of the race for Governor was made.

The President brought up Pittsburgh’s history early on in his hour-long talk at the laid-back TechShop event, where he lounged comfortably on a wooden stool with a cup of tea.

“We’re in a steel town here, in Pittsburgh, and there was a time that manufacturing meant big factories, all kinds of smoke and fire, and a lot of heavy capital,” Obama said in introducing the importance of workspaces like TechShop. “Because of advances in technology, the tools that are needed for production and prototypes are now democratized. They’re in the hands of anybody who has a good idea.”

He showed off his own DODOcase for his iPad as an example of a product that was developed out of a Techshop.

The President spent most of his hour at TechShop taking questions from the audience of young manufacturers and entrepreneurs, responding to specific questions from small business hopefuls such as as one woman’s request for advice for her “Romeo’s Delivery” service, which works to increase communication in romantic relationships, and one man’s struggle as he transitioned from union worker to small business owner.

“As long as I’m president at least, one of my top priorities is going to be to continue to build up manufacturing because I want to make sure that if you work hard in this country, if you’ve got a good idea, if you’re willing to put in some sweat equity, that you can make it here in America and live out your American dream,” he claimed. “Because when we have an economy that works not just from the top-down but from the bottom up, and everybody’s got a stake, and everybody’s doing well, and everybody’s pulling in the same direction, that’s when our economy grows best.”

While Obama made no mention of PA’s Governor’s race, he did close his Q&A session with discussion of partisanship in the Capitol, straightforwardly criticizing the refusal of Republican Congressmen to work with him on addressing issues such as infrastructure and research and development that should not induce partisan polarization.

“I want everyone to feel optimistic and hopeful about the future of manufacturing and entrepreneurship and the American economy and our huge advantage in innovation, but I want also everyone to be paying attention to the debates that are taking place in Washington.”

“Don’t just take for granted that somehow gridlock’s inevitable or that we don’t have good policies that we could be pursuing right now. We do,” he said. “The reason we don’t pursue them is because of politics. And we got one party that just decides they want to say no to everything because they’re looking at the next election instead of what’s good for the next generation.”

The Republican Party responded to the President’s visit to Pittsburgh by holding a conference call in which they criticized his energy policy, particularly what GOP Chairman Rob Gleason calls Obama’s “war on coal.” “Pittsburgh has been devastated by cap and trade,” Rob Gleason said. “We’re coal country, but Democrats want to end it. Under Gov. Corbett, Pennsylvania has become an energy leader.”

President Obama closed with some encouragement for the onlooking manufacturers and entrepreneurs. “All of you inspire confidence in me, and if that’s reflected in what we do in Washington I think we’re going to do just fine.”

Jack Tomzcuk contributed to this report.