President Obama’s Legacy is On the Line 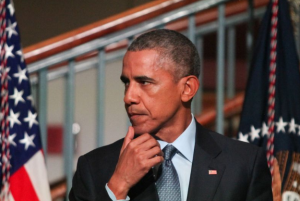 One gets the sense that Barack Obama, 44th President of the United States, is for the most part satisfied with the results of his Administration.

He instituted health care reform, passed a massive economic stimulus, secured a nuclear deal with Iran and led the worldwide effort to reduce climate emissions. Those are just a few of the accomplishments the President is most proud of.

The President has always lagged, however, when it comes to the part of his legacy concerning his party. Democrats have faced record losses during his tenure and his reticence to fundraise and glad-hand has irked the D.C. community.

Recently, however, that has changed. Even today, Edward Isaac-Dovere of Politico detailed how the President will spend the fall stumping for candidates all over the ballot in an attempt to burnish his legacy.

The passage of time obviously changes one perspective but it’s clear the change in Barack Obama’s attitude is the result of one man: the person he once referred to as a “carnival barker”.

It is nearly impossible to think of two men who are as different than Barack Obama and Donald Trump.

Try to imagine both of them in the Rose Garden in December talking about the transition, discussing top-secret issues in the Oval Office and touring the West Wing. What could President Obama possibly write in that letter each Commander-in-Chief leaves to their successor?

The idea that there is a real possibility the he would have to pass the Presidency on to Donald Trump may very well make the President physically sick.

On the other hand, the Democratic nominee is a woman he grew to respect even as they ferociously fought for the office in 2008.

In fact, there may not be a person Barack Obama respects more than Hillary Clinton and a person he respects less than Donald Trump.

The possibility that Trump could not only reverse his policies but redefine his historical legacy may be the most frightening prospect of all.

Before “The Donald” even burst onto the scene, Barack Obama’s mission in his public life has been to prove that America is not how Donald Trump portrays it as. So doing everything he can to prevent the Republican nominee from becoming the 45th President is the most critical component of his legacy.

Tonight, expect the President to talk plenty about the past eight years. His main focus and concern, though, will be the next four months.