By Keegan Gibson and Sari Heidenreich 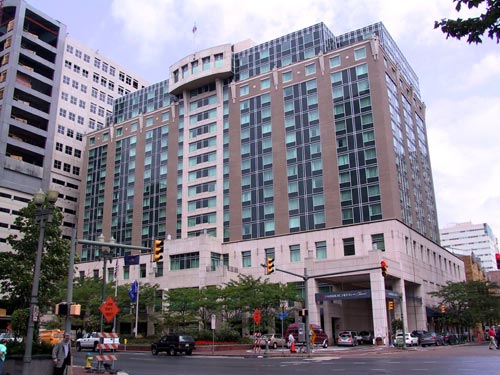 There’s a reason that national reporters are coming to the Harrisburg Hilton this weekend. Between the electoral college fireworks, Senate candidates galore, and a possible Tea Party protest, this weekend’s state committee meeting promises to make serious headlines. Here are the major story lines, events and people who will be moving and shaking this weekend.

Following State Senate Majority Leader Dominic Pileggi’s announcement last week that he intends to push a bill through the legislature that would move the state electoral college away from a winner-takes-all system, Republicans state and nationwide have been lining up to have their say.

Capitolwire reported that Friday night’s keynote speaker, Republican National Committee Chairman Reince Priebus, has weighed in against the plan, as has PAGOP Chairman Rob Gleason, Rep. Pat Meehan (R-7th), and a bunch of other Republicans.

Lining up on the other side, Gov. Tom Corbett, House Speaker Sam Smith, and House Majority Leader Mike Turzai told Capitowire that they support the switch.

On Thursday, David Christian became the most recent candidate to officially declare his bid for the Republican nomination following Colonel John Vernon’s declaration of candidacy Wednesday. Steven Welch and Sam Rohrer also told PoliticsPA they are pursuing the candidacy.

Coal industry veteran and Tea Party leader Tom Smith, who is expected to make his official announcement this month, will be there. He and Welch have each called most or all of state committee members.

The PAGOP is expecting over 400 attendees for Friday night’s dinner, well beyond what they’ve seen in recent years, and they’re attributing it to the straw poll. Politicos will get a glimpse into where the state’s Republican establishment is leaning in the wide open presidential primary.

Over the past week, a flurry of emails have encouraged Tea Party activists to attend Saturday’s meeting to, “show PA GOP leadership that the voting Republicans CAN UNDERSTAND, DO UNDERSTAND, and WILL NOT STAND for leadership making the voting decisions.”

“We welcome anyone to attend our meeting,” said PAGOP spokeswoman Valerie Caras. “It’s encouraging that people are taking an interest in the process. But if someone gets disruptive, they will be ejected from the meeting.”

PA Sen. Rafferty (R-Montgomery) already won a crucial first test in his AG bid – the decision of former AG Jerry Pappert not to run. He will seek to build his status as the early front runner this weekend. This weekend he’ll face Cumberland County DA Dave Freed, who comes very well recommended by a number of his DA colleagues around the state.

“I am greatly looking forward to meeting State Committee members and giving an update on my campaign for the U.S. Senate. I’ve been traveling from one end of the state to the other meeting Pennsylvanians, hearing their concerns, and sharing, if elected to the Senate, how I would do my part to stop the Obama-Casey Agenda in its tracks,” Scaringi told PoliticsPA.

9-?, Juniata Room: John Vernon. In addition to a booth in the lobby, Vernon’s campaign for U.S. Senate is hosting a hospitality suite right after tonight’s dinner. The newly announced candidate is reportedly building decent support among committee members in the state’s northern tier, and seeks to broaden his base.

“This is a great culmination from the past two days. My wife Diana and I look forward to meeting up with friends within the state Republican leadership, and continue making new ones as well,” Vernon said. He’ll also meet with GOP Chairman Rob Gleason.

9-11pm, Allegheny Room: Dave Freed. The AG candidate is hosting reception in honor of the 2011 judicial candidates. The Cumberland County District Attorney is working the state committee as he seeds his bid for Attorney General.

“I am sponsoring a reception after the Fall dinner from 9 to 11 in support of RSC members and our statewide judicial candidates,” he said.  “As a District Attorney, I know firsthand the importance of electing qualified Judges who won’t legislate from the bench.  And our committee members are vital to our chances for victory.”

TBD, Steve Welch for Senate. The Chester County businessman and former congressional candidate and his wife are expecting their third child any day, so rumors that he will host an event probably won’t pan out. He may not even be able to attend.

9-?, Leland Room, Ann Duke, Chester County Treasurer. Duke has confirmed that she is running for Auditor General. This will be her inaugural event.

“I’ve been looking at this race for a couple of months and I’ve been driving around Pennsylvania meeting state committee people to tell them my qualifications and I’ve been getting a very positive response so I decided to proceed,” she said.

Here’s the full list of official events Friday and Saturday.

Saturday:
7:30am, Caucus Breakfast Meetings
9:30am, General Meeting of the Republican Party of Pennsylvania