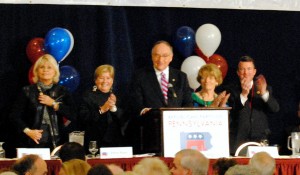 Lieutenant Governor Jim Cawley spoke praising Governor Corbett’s fiscal leadership, citing the creation of 100,000 new jobs in Pennsylvania and the expected announcement of a new $4B petrochemical plant in the Pittsburgh suburbs.  He also promoted the Governor’s proposed budget reforms; his mention of liquor sales privatization was met with enthusiastic applause.

Speaking about Gleason, National Committeeman Bob Asher said,  “It’s not perfect but the Grand Old Party is on the road to progress in the Commonwealth of Pennsylvania under the leadership of Rob Gleason.”

The biggest order of business was the party’s vote to endorse in the race for Pa. Superior Court. Attorney Vic Stabile, the party’s 2011 candidate and a former Chair of the Cumberland County GOP, won the endorsement unanimously.  On February 7th, Stabile received a rating of ‘recommended’ from the Pennsylvania Bar Association.

Earlier in the morning, Judge Rob Wyda withdrew his name for endorsement for Superior Court but said he will remain in the race.

He narrowly won a straw poll vote by the central caucus; Stabile won the remaining 5.

The question of retention for Pa. judges won’t be on the committee’s agenda until the summer meeting, although the northeast caucus reported having voted in session not to endorse Chief Justice Castille for retention.