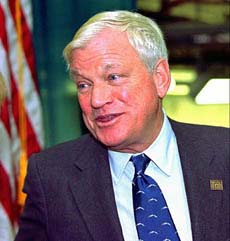 Richard Mellon Scaife, the owner and publisher of the Pittsburgh Tribune-Review and one of the leading voices of conservative politics in the second half of the 20th century, died yesterday. He was 82 years old.

The scion of two wealthy and influential Pittsburgh families, the Scaifes and the Mellons, Richard had his pick of professions. A principal heir to the Mellon family fortune, he was estimated by Forbes magazine to be worth over a billion dollars.

He chose as his primary career that of newspaper publisher and conservative intellectual and financial leader.

In 1970, Scaife bought the Tribune-Review and turned into one of the state’s leading newspapers.

His history of political advocacy went back to Barry Goldwater and included the strong support of Republican Presidents Richard Nixon and Ronald Reagan.

Scaife most memorable political activity, though, was his leadership of the opposition to President Bill Clinton. He bankrolled the so-called “Arkansas Project” that sought to hamper Clinton’s presidency by promoting a number of controversies including the Whitewater land deal, the suicide of Vince Foster and the Paula Jones sexual harassment lawsuit that eventually led to the Monica Lewinsky scandal.

His efforts were so well-known and widespread that they are generally considered the impetus of Hillary Clinton’s infamous 1998 comment that “a vast right-wing conspiracy” had been trying to destroy the Clinton Administration since its inception.

In a rather shocking turn of events, however, Scaife and the Clintons buried the hatchet and ended their feud. Scaife personally met with the former President in 2007 and later interviewed Hillary Clinton in 2008. In a surprising conclusion to the whole saga, the Pittsburgh Tribune-Review endorsed Hillary in the 2008 PA Democratic primary.

Altogether, Richard Mellon Scaife may very well have been the most influential Pennsylvanian of his time.

He is survived by his two children, Jennie and David, his daughter-in-law Sara, and two grandchildren.