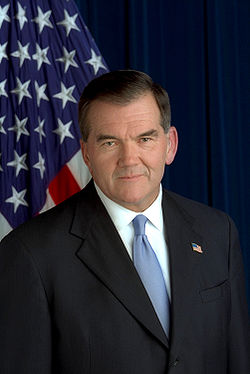 According to the Union-Leader, Gov. Ridge will endorse Jon Huntsman today at an event in St. Anslem, New Hampshire.

This is one of the most high-profile national endorsements the Huntsman campaign has received. It should do him well in New Hampshire, but Ridge is pro-choice – something that Huntsman’s opponents are sure to remember if he climbs into the top tier of the race.

Ridge said Thursday that Huntsman’s experience as a governor, businessman and ambassador make him “uniquely qualified to lead America to a more secure, prosperous and competitive future. He has the experience we need to rebuild our nation’s economic foundation and reduce our crushing debt.

“I know Jon to be a serious, insightful leader who will bring together people from across the political spectrum to solve the many challenges we face, both at home and around the world.”

Gov. Ridge was governor from 1995-2001 and then left Harrisburg to be President Bush’s first Secretary of Homeland Security. He will advise the Huntsman campaign on national security issues.

Ridge just completed a one year agreement with the Marcellus Shale coalition as a surrogate and he is a continued active supporter of natural gas exploration. As a result, Gov. Ridge will also be able to provide advice on energy policy to the campaign.

Update: here is the announcement email from Ridge’s office:

Today I am excited and proud to announce my endorsement of Governor Jon Huntsman for President of the United States.

Governor Huntsman is the only candidate with demonstrated success on the domestic and international stage.

Jon has a proven record in creating jobs, both in business and as governor of Utah, where under his leadership and pro-growth reforms the state led the nation in job creation.

He has served America overseas, most recently as Ambassador to China, so he knows something about our nation’s biggest competitor, and what it takes to compete in the global economy.

His significant experience and statesmanship already signal ten times over that he is ready to take on the complex challenges facing the country and meet the demands of America’s leadership with the rest of the world.

Over the days and weeks ahead, you can count on me to do my part to support his campaign and share his vision for the future of our country with my friends and colleagues.

Today, I ask you to help spread the word as well.  Please forward this email to ten of your friends and encourage them to learn more about his campaign for President at www.jon2012.com.

Then please consider making a donation to his campaign in the amount you can afford.  Making certain Jon’s campaign has the resources to reach voters nationwide is critical. America needs Jon Huntsman.

I am proud to endorse Jon and I am excited to support his campaign. Thank you in advance for your support, too.