Cornwall — Mitt Romney and PA’s leading Republicans talked up his chances of winning the state during a rally Saturday. “I AM gonna win Pennsylvania!” Romney declared to a crowd of about 700 supporters in Lebanon County. Gov. Tom Corbett, Sen. Pat Toomey and several others joined him.

“We’re going to restore the principles that America is the exceptional nation it is, and get America working again,” Romney declared in a local variation of his stump speech. “They were principles fought for and fought about and written right here.”

“This is a tough state. A million registered voters more? Not an easy state for Republican to win But it is winnable,” Corbett echoed in a conversation with reporters afterward. “This is a very different dynamic this year than it was four years ago. You can feel it.”

But a last-minute cancellation by the Romney campaign may have turned the entire PA leg of the tour and the day into a net-negative for the candidate, judging by Sunday’s headlines in southeast PA.

Just a few hours before Cornwall, the former Massachusetts Governor declined to face a challenge that awaited him at a Bucks County Wawa gas station. In addition to about 200 Romney supporters, Democrats – including former Gov. Ed Rendell and about 150 protesters – had gathered there to greet him. Rather than face the mixed crowd, Romney’s bus made an unannounced detour to another Wawa across town.

He brushed off questions about the schedule change, noting Rendell’s recent criticism of the President. “Romney disappoints hundreds by skipping campaign stop,” read the headline in the Bucks Intelligencer: “Romney told supporters at the Richland Wawa that he chose to go to that store because he “had a surrogate over there (in Milford) already. My surrogate is former Gov. Rendell, who said we could win Pennsylvania.”

Quakertown was the second PA stop on Romney’s “Every Town Counts” bus tour. He started the day in Carbon County where he spoke to supporters at Weatherly Casting & Machine Company. He received his warmest welcome in conservative Cornwall, Lebanon County. GOP elected officials warmed up the crowd – and emphasized that PA is in play for the general election. 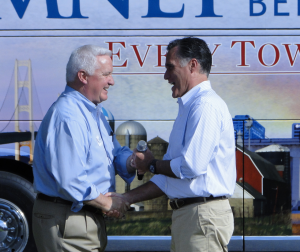 “He said look, if I can’t turn this economy around in 3 years, I’m looking at a one term proposition. He’s right! We’re here to collect!”

Polls alternately show Pennsylvania up for grabs and leaning Obama’s way. That plus Democrats’ 1 million voter registration advantage in the state has many questioning whether PA will actually be a battleground.

Included in that group is Congressman Jim Gerlach, who in introducing Romney said, “We have a responsibility, a duty it seems to me, collectively, to make the Romney campaign believe in Pennsylvania. Because there’s a simple fact: if Governor Romney wins Pennsylvania, he will be the next President of the United States.”

Gerlach added Cornwall and other parts of Lebanon County after congressional redistricting.

Corbett, Toomey and Lieutenant Governor Jim Cawley each cited their own 2010 wins as proof that it could be done.

In recent weeks Romney’s campaign has begun to increase its presence on the ground with new, full time staff. But as of the latest figures, the Romney team haven’t spent a dime on television in the state since the primary.

Former Minnesota Governor Tim Pawlenty, Toomey and Corbett all appeared with Romney. Each has been talked about as a possible pick for his running mate, but both of PA’s top Republicans cast doubt Saturday on whether they would serve.

During his introductory remarks, Toomey said, “I cannot tell you how much I am looking forward to serving as your Senator with Mitt Romney as President of the United States in the White House.”

And in a conversation with reporters after the event, Corbett, asked who he’d like to see Romney choose as VP, said, “Not me. I’m busy here.”

During his speech, the Governor boasted, “That’s what we’re doing in Harrisburg. You know, we’re reducing [government]. We’re reducing it. In the last 18 months, we’ve increased private sector jobs by 82,000. And we’ve reduced public sector jobs by 19,000.”

Corbett suggested that the presumptive nominee choose someone with executive experience.

“I look at the Governors, like Governor Daniels of Indiana, I think he’s a very good Governor. Susana Martinez is doing a great job down in New Mexico, so is Nikki Haley in South Carolina. Bob McDonnell has done a great job in Virginia.”

Two hundred yards away from the rally, the Obama campaign, several Democratic candidates and a few dozen protesters staged a response event. State Rep. Eugene DePasquale, candidate for Auditor General, Manan Trivedi, Gerlach’s congressional opponent in the 6th district, and Jerry Oleksiak, Vice-President of the PA State Education Association, stuck to the party’s message: that Romney’s policies had failed Massachusetts and would fail the country, too.

“You have the Corbett-Romney agenda, which is really an attempt to cut public education,” said DePasquale. “I can just tell you, with two kids in public schools, rising class sizes is not going help make it easier for them to compete against – not just kids from Ohio or Illinois – but compete with kids from India and China in the future.”

“Jim Gerlach, just like Mitt Romney, have no real vision for the future except the failed policies of the past. More and more tax cuts for millionaires and billionaires in hope that it trickles down. It didn’t in the past and it won’t again,” said Trivedi. “Jim Gerlach has voted and Mitt Romney has endorsed the pursuit of an ideological agenda in Congress.”

The event was the last of half a dozen Dem responses to Romney’s PA tour.