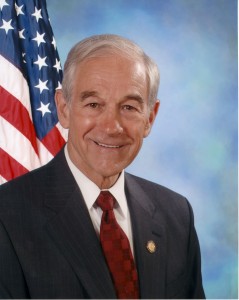 Speaking on the lawn of the Independence Mall Visitors Center in Philadelphia’s historic Old City, Paul told the estimated 4,300 rain-battered attendees that his campaign or “revolution” as he calls it, will continue on as long as his loyal base keeps the faith.

“When a campaign starts to fade, two things can happen: one, the money dries up and two, nobody shows up,” said Paul. “But I’ll tell you what, we’re still getting a lot of people showing up in the bad weather and the money bombs are still working.”

As the crowd chanted “President Paul”, the silver-haired representative from Texas was crystal clear in his stance on America’s involvement in the Middle East.

“It is now time to bring the troops home, said Paul. “We have more weapons then everyone else put together, nobody is going to invade us, why do we have to go out looking for dragons to slay?”

In Paul’s estimation, the enemy that poses the biggest threat to our liberty is not a foreign one, but domestic. The loudest cheer of the afternoon came when he reiterated his campaign-trail promise of ending the Federal Reserve and cutting other wasteful government spending.

“Even on the Republican side of the aisle there is a proposal to balance the budget in 30 years,” said Paul as the crowd enthusiastically booed. “My proposal is to cut $1trillion my first year in office.”

However, the main clout of Paul’s speech was reserved for the government encroaching on personal freedom. His willingness to stand behind even the more controversial issues of personal liberty, like drug legalization, is a huge reason that Paul enjoys the devoted following that he does.

“The “War on Drugs” has been much more dangerous than the drugs themselves,” Paul said.

Paul has a particularly strong pull with younger voters, who turned out in droves to see their candidate on Sunday.

“I came out here to show my support for Ron Paul,” said Travis Belcher, a student at Bucks County Community College. “He’s the only candidate that truly believes in the constitution.”

Pointing to the internet as the greatest resource for the “truth”, Paul warned that the internet will continue to face legislation like the highly publicized SOPA and PIPA bills that aimed to implement government restrictions on surfing the web.

“The third amendment was written to protect our privacy and that if you have an approved society then you should have open government,” said Paul. Now we have a secret government and we have no privacy left, we need to reverse that.”

Despite the weather, many supporters continued to hang around long after Paul had finished his remarks, talking excitedly amongst themselves and waiting for the chance to catch a glimpse of their man as he was ushered into his black SUV.

“He’s the only one that understands that there is difference between freedom and democracy, and our country is based on freedom, not democracy,” Erol Surmodley. “I have a wife and daughter that I would like to see grow up in a free and safe country; he’s quite frankly our only option to do so in the long term.”

Ron Paul may trail far behind presumptive Republican nominee Mitt Romney in the delegate count, but Paul supporters refuse to let the naysayers rain on their parade.

“This is our fight for freedom, this is our time, we have to do this,” said Megan Shaner.