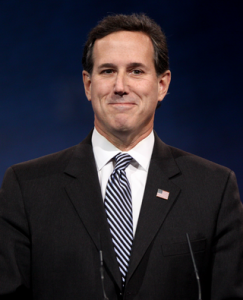 The Supreme Court ruled that state bans on same-sex marriage are unconstitutional and Rick Santorum is not happy.

The former Pennsylvania Senator and presidential candidate has long been an opponent of same-sex marriage and his response today was no different.

“Today, five unelected justices decided to redefine the foundational unit that binds together our society without public debate or input,” Santorum stated. “Now is the people’s opportunity respond because the future of the institution of marriage is too important to not have a public debate. The Court is one of three co-equal branches of government and, just as they have in cases from Dred Scott to Plessy, the Court has an imperfect track record. The stakes are too high and the issue too important to simply cede the will of the people to five unaccountable justices.”

The cases Santorum cited, Dred Scott and Plessy, are generally considered the most infamous in the history of the Supreme Court.

In Dred Scott v. Sanford, the Court ruled that Scott, a slave at the time in Missouri, could not sue for his freedom. Additionally, Chief Justice Roger Taney’s majority opinion asserted that African-Americans, whether then enslaved or free, were not American citizens and therefore had no legal standing.

The Dred Scott case is considered by historians as one of the major causes of the Civil War. It is unlikely today’s decision will lead to similar circumstances.

Santorum went on to state that he will lead the fight against the Court’s ruling that LGBT Americans have, as the Justice Kennedy put it, “equal dignity in the eyes of the law.”

“As President, I will be committed to using the bully pulpit of the White House to lead a national discussion on the importance to our economy and our culture of mothers and fathers entering into healthy marriages so that every child is given their birthright- to be raised by their mother and father in a stable, loving home,” Santorum concluded. “I will stand for the preservation of religious liberty and conscience, to believe what you are called to believe free from persecution.  And I will ensure that the people will have a voice in decisions that impact the rock upon which our civilization is built.”

Justice Kennedy did address religious liberty, however, in his majority opinion.

The following is the last paragraph of section IV of Kennedy’s opinion:

Finally, it must be emphasized that religions, and those who adhere to religious doctrines, may continue to advocate with utmost, sincere conviction that, by divine precepts, same-sex marriage should not be condoned. The First Amendment ensures that religious organizations and persons are given proper protection as they seek to teach the principles that are so fulfilling and so central to their lives and faiths, and to their own deep aspirations to continue the family structure they have long revered. The same is true of those who oppose same-sex marriage for other reasons. In turn, those who believe allowing same-sex marriage is proper or indeed essential, whether as a matter of religious conviction or secular belief, may engage those who disagree with their view in an open and searching debate. The Constitution, however, does not permit the State to bar same-sex couples from marriage on the same terms as accorded to couples of the opposite sex.

Of course, Santorum’s statement was released just a half hour after the ruling was announced so it is possible he had not yet read the decision.