Point: Rick Santorum. This morning the former Senator released a video that took a swipe at Presidential rival Jon Huntsman. 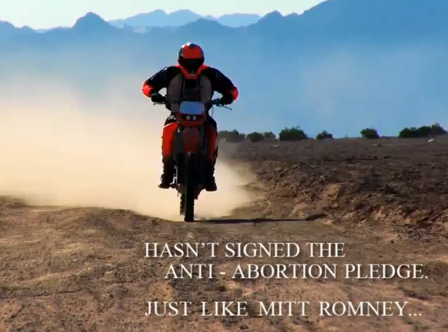 The video parodies a web ad released by Huntsman leading up to his formal Presidential announcement earlier today. Huntsman’s original video depicts a man riding a motorcycle through the desert with the words “coming soon.”

Santorum’s video has similar shots of a man riding through the desert but ends with the statement, “[Huntsman] hasn’t signed the anti-abortion pledge…just like Mitt Romney,” followed by the motorcyclist crashing.

Santorum’s video refers to the Susan B. Anthony Pledge, authored by an anti-abortion organization called the Susan B. Anothony List. The pledge calls for a candidate, if elected, to permanently end all taxpayer funding of abortion, defund Planned Parenthood, and appoint abortion opponents to the federal bench and Cabinet positions. So far every Republican Presidential hopeful has signed the pledge except for Huntsman, Godfather Pizza CEO Herman Cain, former New Mexico Governor Gary Johnson and Governor Mitt Romney. Romney chose not to sign the pledge because he was worried about “some potentially unforeseen consequences.”

Sanotrum criticized Romney for abstaining from signing the pledge stating, “it is incredibly disappointing that Governor Romney chose not to defend those who cannot defend themselves.”

Santorum’s video is the latest attack on Romney and has the added bonus of going after Huntsman. Huntsman’s campaign fired-back saying,  “people who rely on pledges usually don’t have a record. Fortunately Governor Huntsman, a life-long, no flip flops pro-lifer, has actually signed anti-abortion legislation into law – that’s a signature that makes a difference.”

Later in the day Huntsman clarified his position to reporters explaining, “I don’t sign pledges. I was asked to sign a pledge when I ran for governor in 2004, and I didn’t.”

It is likely that over the next months of campaigning and during the upcoming Presidential Debates Santorum will use the Susan B. Anthony Pledge as a platform to assert his pro-life credentials and to separate himself from the other candidates.