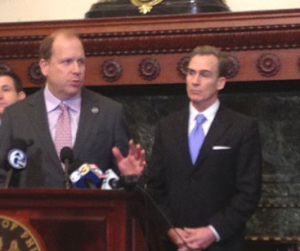 “The tipped minimum wage hasn’t changed in 23 years and allows business owners to take advantage of low-wage, disproportionately female workers even demanding they do un-tipped work like dish washing and cleaning bathrooms for $2.83 an hour,” Leach said. “Pennsylvania’s economy will grow as over 1 million workers in PA would see their wages rise if we pass this bill. Twenty years of research has shown that in states that have increased the minimum wage, small businesses had lower turnover and increased productivity.”

Stack believes those who defend the “poverty wages” have been putting too much pressure on working families, and it’s getting more and more difficult to handle with the slip ‘n’ slide economy.

“Adjusting the minimum wage to account for inflation prevents working families from being trapped in poverty and reduces dependence on public assistance,” Stack said. “Fair wages for a day’s work is fundamental to achieving the American dream and generating self-determination and independence.”

Advocates point out that since most minimum wage earners, tipped and otherwise are women, poverty wages aggravate the gender pay gap.

“In Pennsylvania, nearly two-thirds of minimum wage workers and workers in tipped occupations are women, said Wendy Voet, executive director of WOMEN’S WAY. “In order to move the needle on women’s status as a whole, and to support the economic success of our communities, we need to support policies and programs to enhance women’s economic security.”

The last time the Pennsylvania General Assembly voted to raise the overall minimum wage was in 2007, from $6.25 to $7.15. The state’s minimum wage reached $7.25 per hour when the federal minimum wage increased in 2009. As of now, 21 states have higher minimum wages than PA.

This proposal is higher than the popular federal number of $10.10, and will likely earn backlash from small business organizations. In fact, the National Federation for Independent Businesses recently put out a study saying that raising the minimum wage to above $8 would eliminate jobs in the state.

The National Federation of Independent Business Research Foundation report projects the effect that three Pennsylvania minimum wage bills will have on jobs and economic activity in our state. The findings forecast the loss of as many as 28,000 to 119,000 jobs over a ten year period when the wage is increased to $8.75 or $9.00, as those increases are tied to cost-of-living adjustments. According to NFIB, the report uses a widely accepted regional economic model that is also used by the federal government, local governments and universities created by REMI, Inc.

In the busy election season 2014 is turning out to be, both Leach and Stack are making attempts at higher office. Leach wants to replace Rep. Allyson Schwartz, since she left her post to run for governor. Stack is in the middle of the race for lieutenant governor.