September 22: On The Road Again 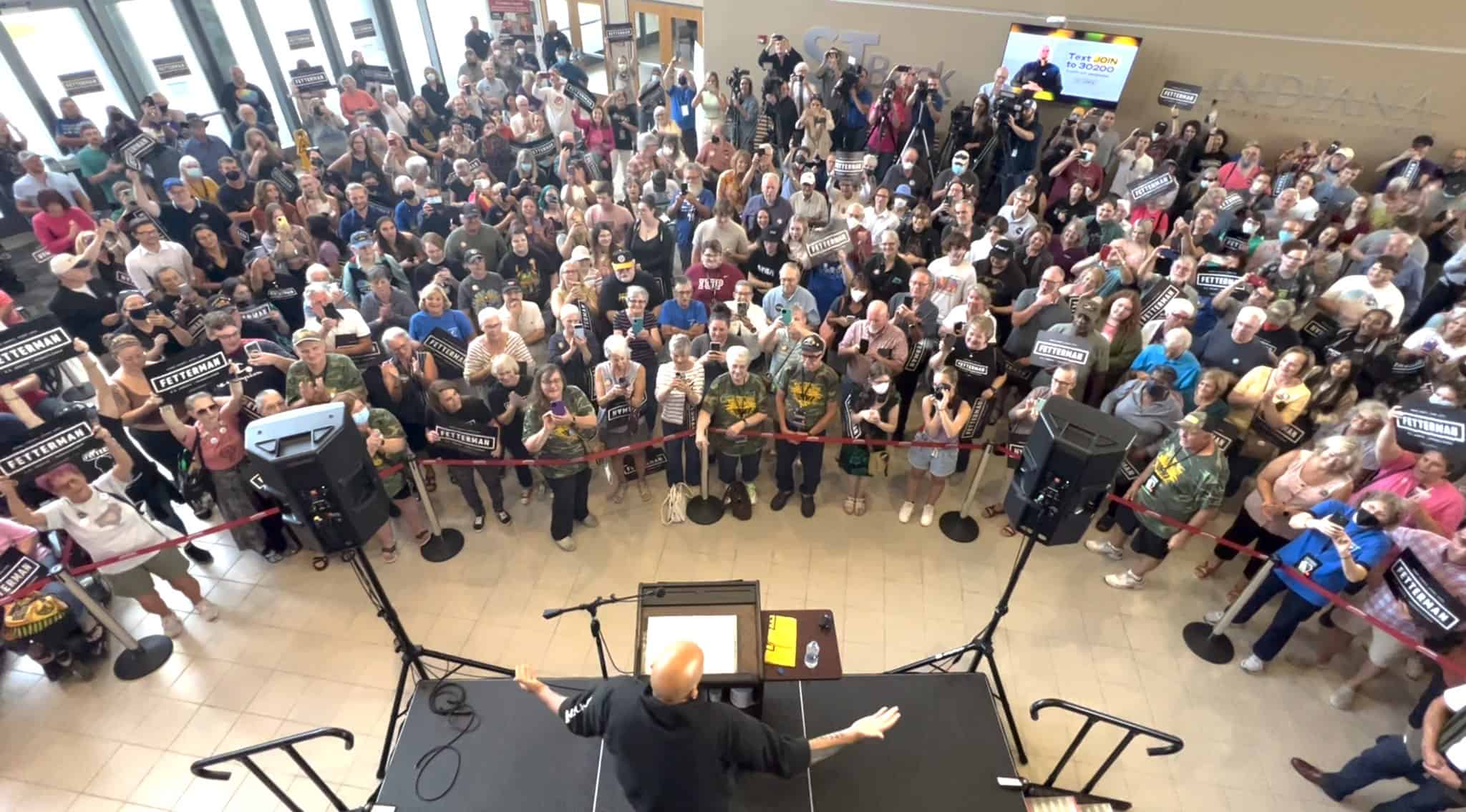 “Pennsylvania Senate candidate John Fetterman (D) is becoming more of a regular figure on the physical campaign trail after weeks of facing scrutiny over his health.

Last weekend, Fetterman drew a crowd of 1,000 at a Scranton rally and is slated to hold another rally in Philadelphia this weekend. The campaign said they saw a crowd of 3,000 attend a rally with Fetterman and Planned Parenthood earlier this month in Philadelphia, the same day as the home opener for the Philadelphia Eagles, no less.

The Democrat is also seeking to appeal to voters in rural and conservative strongholds. Fetterman’s campaign said a crowd of over 500 supporters came out to see the candidate at an even in “deep red” Indiana County on Tuesday.” (The Hill)

PA Dems Mail GOP Abortion Bill to Oz. Republican Senate candidate Mehmet Oz has stated that he has yet to read the GOP’s bill to ban abortion nationwide. So the Pennsylvania Democrats have decided to mail a copy of the bill to Oz’s campaign HQ in Huntingdon Valley and to a pair of out-of-state residences, looking for a response.

Jan. 6-Led Election Bill Passes House, But Has An Uncertain Senate Future. “The House quickly took up and passed its response to a Senate proposal on how to overhaul a 135-year-old law governing the counting of presidential electoral votes, sending the hot-button issue back to the other side of the Capitol.” (Roll Call)

“We continue our series on the candidates for the Pennsylvania State House with a look at Allegheny County.” (PoliticsPA)

Allegheny County Democrats Hope to Pick Up Pace on Mail-In Ballot Applications. “With a month-and-a-half to go before the Nov. 8 midterm election, the number of mail-in ballot applications in Allegheny County is only slightly higher than it was at this point in 2021.” (WESA)

50-50 on Mail Ballots. In an unscientific poll of PoliticsPA readers, the respondents were split nearly down the middle on the use of mail ballots, as 50.4% indicated that they had requested a mail ballot, while 49.6% said they planned to vote at the polls.

“The Republican-controlled state House gave its approval this week to bills requiring state election officials to remove people who have died from voter rolls and require county election officials to follow additional procedures to secure ballots being transported to and from polling places.

Both bills passed the House unanimously and have been referred to the Senate State Government Committee.” (Pennsylvania Capital-Starhttps://www.penncapital-star.com/blog/house-passes-legislation-to-cancel-dead-voters-registrations-improve-ballot-security-during-transport/)

Thousands of Older Pennsylvania at Risk of Losing Property Tax Rebates Due to Legislative Inaction. “There is wide agreement that the main reason for the decline is that state lawmakers haven’t updated the income limits for homeowners to qualify in more than 15 years. For renters, it’s been more than 35 years. As incomes have gradually increased over time, buoyed mostly by inflation, it has become harder to qualify for a rebate.” (Spotlight PA)

Former Employee Alleges Sen. Katie Muth Bullied Staffers, Kept an “Abusive Environment.” “A former employee for Sen. Katie Muth alleged in a 2020 Facebook post that the senator bullied her staff, and that the first-term senator was “perpetrating an abusive environment in her office.”” (Broad + Liberty)

Philly’s Board of Ethics Voted to Close a Loophole That Super PACs Use to Get Instructions From Campaigns. “The Philadelphia Board of Ethics on Wednesday approved changes to the city’s campaign finance rules aimed at closing a loophole that could have allowed candidates for city offices to give specific instructions to outside spending groups that are supposed to be prohibited by federal law from coordinating with them.” (Philadelphia Inquirer)