Rev. Al Sharpton slammed freshman Rep. Mike Kelly an a segment last night on MSNBC, suggesting that the Congressman of acting unethically regarding his financial ties to the energy industry.

During an afternoon time slot in which the infamous Sharpton filled in for liberal commentator Cenk Uygur, he picked up on a ThinkProgress report about a recent Kelly town hall during which the Congressman defended federal subsidies for energy companies. 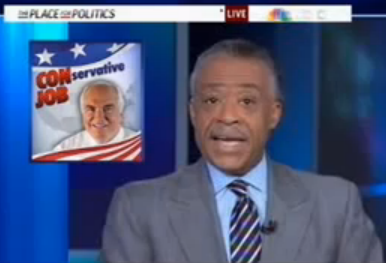 “A Republican Congressman defending big oil, that’s not new. What is new: doing when you have investment in big oil companies. And that’s our ‘con job’ of the day,” said Sharpton. “ThinkProgress reports Pennsylvania freshman Mike Kelly faced angry voters at a town hall when the conversation turned to oil subsidies he voted for.”

The screen flashed to segments of this town hall video, of Kelly speaking to a crowd in Meadville last week. During the meeting, Kelly argued that many pension plans rely on energy companies to remain profitable.

“Is there anybody in here that has a pension? Anybody have a portfolio,” Kelly asked. “I want you to very carefully look at those portfolios. Those are usually made up by profitable companies.” 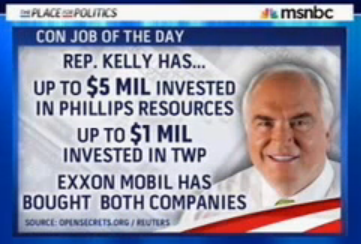 The ThinkProgress article was more pointed in its criticism of Kelly. It estimated his investment in energy companies at $6 million, and noted that those companies are also involved in Marcellus shale gas drilling.

“It is sad but unsurprising that the Pennsylvania Republican would disparage those who call for an end to subsidies as engaging in ‘class warfare,’ while at the same time arguing that taxpayers should support the very oil and gas companies he’s invested in because “we want companies to be profitable.”

Kelly’s office did not dispute the facts or figures presented by Sharpton. Instead, spokeswoman Julie Thornton said the Congressman’s assets were hard-earned, and noted the Kellys’ history of charitable giving.

Here is the response from Kelly’s office in its entirety:

“Mike believes that with God all things are possible. Mike feels very blessed that both his family and his wife’s family have achieved success after decades of hard work, personal sacrifice, and significant adversity. By the grace of God and through the hard work of many, the Kellys have achieved the American Dream. Mike’s father, a WWII veteran, started out as a parts picker in a GM parts warehouse and Mrs. Kelly’s ancestors started off as wildcatters in Pennsylvania’s early oil rush days over 100 years ago.

“They understood that with the opportunity to succeed came the risk of failure, but like most Americans, they dared to dream and they do not apologize for that.

“Although Mr. Kelly has never met Reverend Sharpton, he is not surprised by his comments given the Reverend’s history of divisive and polarizing commentary and not telling the whole story.

“Lastly, both Mike’s and Mrs. Kelly’s families have a strong history of philanthropy and have been able to give back to their communities as a result of their success, a record of service the Reverend surely would approve.”