How Statewide GOP Candidates Did at PLC (With Video)

As you doubtless recall, the Pennsylvania Leadership Conference is the annual meeting of the state’s conservative activists that occurred over the past weekend. Needless to say, any candidate hoping to tap into the political energy of the Tea Party and other activists were on hand and working to make a good impression.

We already talked about the evolving relationship between the Tea Party and the GOP in PA. With that in mind, we wanted to bring you this bit of followup about the folks who have to walk that line: candidates. Here’s how the statewide candidates did at PLC.

Corman told PoliticsPA that he was speaking in his role as PA Senate Appropriations Chairman, rather than as a candidate for Senate (though Kevin Shivers of the National Federation of Independent Business joked about it when he introduced him). However, Corman said he’s already met with the NRSC and stands to gain all of the fundraising success that comes with being the establishment candidate. So how did he do in this crowd?

Fairly well. Corman, who more than anyone in Harrisburg will determine the outcome of the PA’s next budget, delivered a red-meat speech about reducing spending, improving the climate for businesses, school choice, government efficiency, and tort reform (he sponsored SB2).

“I think I’m the only Appropriations Chairman in the history of the Commonwealth who’s spent his career trying to think of ways to spend less money as opposed to more,” he said to claps and whistles.

However, Corman wasn’t able to keep the enthusiasm up throughout his remarks. About half-a-dozen applause lines stood out from a relatively wonkish speech. 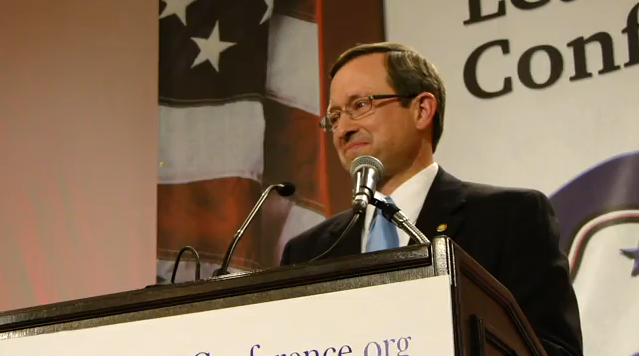 The State Representative and 2010 primary challenger to Tom Corbett held court everywhere he went. People lined up to talk with Rohrer and his wife throughout the weekend. Event organizer Lowman Henry credited Rohrer with forcing then Attorney General Corbett to take his no-tax pledge during the campaign. More than a few attendees were overheard discussing a recent story from the Post-Gazette that he is leaning 50/50 toward a run for U.S Senate.

Not originally scheduled to speak, Rohrer took over for Tim Phillips, the President of Tea Party-affiliated Americans for Prosperity, who was unable to appear for the breakfast panel discussion. Rohrer heads the PA chapter of AFP. His speech hit all the right notes and received a standing ovation.

“The first thing starts with this: we’ve got to tell the truth. We have to begin by telling the truth,” Rohrer said to applause. “We haven’t gotten the truth out of Washington for how long?”

He said the official numbers on unemployment, inflation, the budget, the debt and deficit were each being misled by legislators in general and the Obama administration specifically. He railed against spending, infringement on individual liberty, and ‘Obamacare.’ At the same time, he called for honesty in government, conformity to the Constitution and renewed faith in God.

Simply out, this was home turf for Rohrer. These were the people who energized his 2010 campaign; the ones who put out those ubiquitous yard signs. Aside a few scattered whispers about his 2005 pay raise vote, Rohrer was on top of the world last weekend. Click here to watch part one of his speech. Part two, below, is where he hit his stride.

Marc Scaringi was on site working the room as well. Like Rohrer, Scaringi can’t currently rely on establishment support for his campaign (especially fundraising). The former staffer to Sen. Rick Santorum and the first official declared Republican challenger to Casey will depend heavily upon the support of conservative activists like the ones in this room.

“I identify ideologically with just about everything the PLC is all about,” Scaringi said. “These guys are on the front lines; the freedom fighters, if you will, fighting for liberty and freedom and the free enterprise system.”

He said his message will resonate with PA conservatives.

PoliticsPA asked him a tough one – one decision by Barack Obama that he agreed with. Scaringi couldn’t think of one, but he did have a few items over which he disagreed with the President.

Finally, PoliticsPA did not see or hear whether Scranton Tea Party leader Laureen Cummings was in attendance. She reportedly declared against Casey last month.

Covey and Stabile are the PA Republicans’ endorsed candidates for Commonwealth and Superior Court, respectively. That played about as well as one might expect in a room of people who openly scorn the “establishment” GOP endorsement process. The two were introduced around the room by PA GOP staffers, and to their credit vigorously worked the crowd.

He’s the unendorsed candidate for Commonwealth Court, and he did fairly well with the conservative crowd. He worked the room with the help of a few conservative political pros who are helping his campaign. Boasting that he was the judge who froze the assets of Dr. Kermit Gosnell, the infamous Philadelphia abortionist, Panepinto said his record on the bench was what set him apart.

“These people judge the candidates on their record,” Panepinto said, contrasting the PLC with Republican State Committee.

“I’m pro-life, I’ve promoted adoptions. I’m the type of person who wants to settle matters and not let frivolous lawsuits continue on. It’s a whole record.”