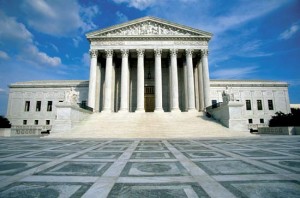 Today, the Supreme Court ruled that same-sex couples have a right to marry.

You can read the opinion here.

The following is a running tally of reactions from public officials throughout the state.

“Today, the Supreme Court affirmed that no American can be denied the right to marry because of who they love. This historic ruling is a victory for LGBTQ Pennsylvanians and allies. ‘Gay marriage’ is now simply marriage and the pursuit of happiness will no longer be denied for same-sex couples.

“On the heels of the Supreme Court’s action today, the Pennsylvania legislature should stand-up and pass non-discrimination for LGBTQ Pennsylvanians, so that they can no longer be discriminated against in employment or housing for being who they are.”

“Today’s ruling is a substantial victory for equality across our nation. This was the right decision and will ensure that all couples will be treated with basic dignity when it comes to marriage. As a U.S. Senator representing Pennsylvania, I have heard from many LGBT Pennsylvanians and their families who want nothing more than equal rights under the law.  As one mother from Pennsylvania said in a letter to me:

‘My kids have two proud and loving parents who are honest [and] work hard.  I want my kids to know they are equal and our family is equal . . . I just want my family to be treated equally and with respect by my state and federal government.’

From this day forward that family that wrote to me and millions of LGBT families across the nation can know that their family is equal.”

“I applaud the United States Supreme Court for ruling in favor of equality and human rights, and I congratulate members of the LGBTQ community for winning the fight they have waged for so long.

“Love prevailed in the Supreme Court decision. The pursuit of happiness is a fundamental right that dates back to the very founding of this nation. LGBTQ rights are human rights, and everyone deserves to be able to marry the person they love.

“I’m proud to support marriage equality in Pennsylvania and beyond.”

“The Supreme Court’s action today in Obergefell v. Hodges settles the Constitutional issue of marriage equality in this country. Marriage equality has been the law of the land in Pennsylvania for over a year now. Life is too short to have the force of government stand in the way of two adults whose pursuit of happiness includes marriage. As a Republican, I value equality, personal freedom and a more limited role for government in our lives. I believe this philosophy should apply to the issue of marriage as well. That said, churches and other religious institutions should never be compelled by the government to perform wedding ceremonies that violate basic tenets of their faith.

To all those Americans today who are able to marry their loved ones and have that marriage recognized everywhere throughout the country, congratulations.”

“Today, I join with millions across our great nation in celebrating this landmark decision to affirm marriage equality in the United States of America. Now, LGBTQ individuals will have the right to marry whomever they choose, wherever they choose. Now, all families will have equal, protective rights and benefits in all 50 states.

“This is a monumental step forward in our country’s pursuit of equal rights for all. Today, everyone who has fought so hard for this moment can stand proud knowing that marriage is a fundamental right. It is a proud day for America, because love has won.”

“Today’s landmark Supreme Court decision affirming the legality of same sex marriage is a victory not only for same sex couples, their families and children, but affirms the rights of all citizens for equal treatment under the law. Our great nation spends billions of dollars protecting the civil rights of human beings around the world.  It is appropriate that in our system of justice, we vigorously defend our Constitution in every instance and protect the civil liberties of those here at home as well.”

“I am thrilled for our country that the Supreme Court has come down on the side of equality. At the same time, I am concerned for people who are at risk of getting fired for getting married. In most of Pennsylvania and many other states, it is still legal to fire someone or deny them an apartment, a hotel room or a table in a restaurant because they are lesbian, gay, bisexual or transgender.”

“Today is a day for celebration as marriage equality is firmly enshrined in law. But we must not lose sight that it remains legal to deny our family, friends and neighbors jobs, housing or a public accommodation such as a restaurant table because of who they are. That is wrong, is un-American and about 70 percent of Pennsylvanians have agreed for years that we need laws against that type of discrimination.”

“Today’s ruling is a tremendous victory, but it is also a call to action. Philadelphians must rally together and demand a statewide non-discrimination law that protects on the basis of sexual orientation and gender identity and expression. As one of the most LGBT friendly cities in the nation, it is our responsibility to continue fighting until complete equality is a reality in every corner of this state and this country.”

“The high court had a responsibility to follow the Constitution but instead chose to follow the wishes of a political movement. The natural, traditional definition of marriage that I and millions of others believe in worldwide remains a cornerstone of human civilization. To redefine this institution, especially on a national scale, carries uncertain consequences and deserves serious scrutiny. Today’s ruling rips this critical debate from the democratic process by redefining marriage for all 50 states. Going forward, defenders of our Constitution have a renewed duty to protect every single citizen’s First Amendment rights and guarantee that no person or organization’s religious freedom is in any way undermined by today’s controversial decision.”

“Despite the votes of 5 unelected lawyers, marriage was between a man and a woman at the time that the Fourteenth Amendment was enacted, at the Founding of our country, and in every time and place until 2004. Just two short years ago, the same five justices insisted that marriage was a policy decision that properly belonged to the states. Today’s ruling will lead to grave infringements of religious freedom across the United States.  Every American should be free to affirm the truth about marriage without being punished by the government. In the wake of this decision, we must ensure that no governmental entity is ever permitted to discriminate against Americans because they affirm the truth about marriage. No one should be forced to choose between their faith and their livelihood.”