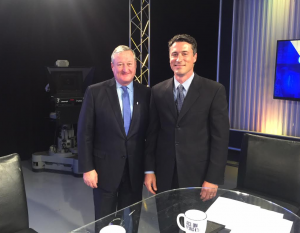 This week our show features former Secretary of Defense Robert Gates, who talks about his new book “A Passion for Leadership”.

Rep Jesse Topper is on the show this week, RJ is filling in for Charlie Gerow. Joined by Tony May for questions and analysis.

Host Matt O’Donnell welcomes Philadelphia Mayor Jim Kenney (D) on Inside Story this week.  They discuss the proposed ‘Sugar, Sweets & Beverage Tax’, the rumored new Fire Commissioner, plus education funding and criminal justice reform. Our panel discusses the upcoming DNC and how the PA Presidential Primaries might ACTUALLY matter after Sanders and Clinton stomp in Philadelphia this week. Catch the Inside Story…Sunday at 11:30 a.m.

On this week’s broadcast – celebrating Pittsburgh triumphs – and examining its challenges – for the future.

Pittsburgh has received acclaim – for an economic turnaround, and for reinventing itself – to expand its economy, from almost total reliance on heavy manufacturing, to a diversified presence of health care, educational think tanks, high-technology, and industries that rely on the presence of a combination of these economic forces.

Our guests include Rebecca Bagley – Vice-Chancellor for Economic Partnerships – who participated in a panel discussion, this week, at the Brookings Institution, in Washington, D.C., about ways that former “rustbelt” communities are now becoming a center of “brain power and innovation”, Pittsburgh City Councilman Corey O’Connor (D) 5th District (including Hazelwood, where a powerful Jones & Laughlin steel mill, once stood) – whose community is trying to attract new industries and services, to replace heavy manufacturing ,as the main source of income, and Doug Heuck – Editor & Publisher of “Pittsburgh Quarterly”, and Director of “Pittsburgh Today” – at the University of Pittsburgh’s Center for Social and Urban Research.

Can Pittsburgh ever shed its stubborn, “rustbelt” image?

This week’s Pennsylvania Newsmakers features reporters Steve Esack of the Allentown Morning Call, and Marc Levy of the Associated Press, who discuss the arrival of the presidential campaigns in Pennsylvania and the Democratic U.S. Senate primary. Then, joining host Terry Madonna are Stacey Hankey, CEO of the Lanco Federal Credit Union, and Patrick Conway, President and CEO of the Pennsylvania Credit Union Association, with a financial literacy update focusing on financial education for young people. Link here.

This past week, a federal judge in West Virginia sentenced Massey Energy CEO Don Blankenship to a year in prison and a $250,000 fine — after his conviction, last year, of conspiring – to “willfully violate safety standards” at Massey’s Upper Big Branch Mine, where 29 out of 31 miners died – in an explosion, in 2010.

Jon Delano talks with David B. Fawcett – Partner with Reed Smith, LLP and Bruce Stanley – Partner with Stanley & Schmitt, P.C. — two Pittsburgh attorneys, who initially represented the families of those miners killed – for their reaction to the judge’s sentence.

Then, a discussion with the President of the Heinz Endowments – Grant Oliphant – about his quest for our area to build on some of the economic and political progress being made – and also tackle some of the remaining challenges – including the need for greater population diversity. He calls this quest, working for a “Just Pittsburgh”.

Finally, “60 Minutes”’ CBS News Correspondent Lesley Stahl joins us – to talk about her new book – “Becoming Grandma – The Joys and Science of the New Grandparenting”. The book discusses the critical role that grandparents play – in keeping our family structure and our workforce healthy, and is a revealing look at what the presence – or absence – of grandparents, can mean — to a child — and society.