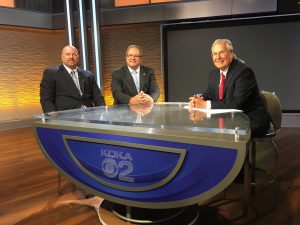 To tax or not to tax Marcellus Shale drillers? That is the question on This Week in Pennsylvania. Experts on both sides of the debate weigh in. Is it fair to single out one industry for additional taxation? Also our analysts discuss the still incomplete budget and whether Confederate monuments in places like Gettysburg should be removed.

The Pittsburgh region secured a big win late last year with the passage of the Water Infrastructure Improvements for the Nation (WINN) Act, a multibillion-dollar waterways infrastructure funding passage that authorized investments of $2.7 billion over 20 years on the Upper Ohio River in southwestern Pennsylvania. U.S. Senator Bob Casey joins us Sunday to talk about the importance of increased investment in the region’s waterways infrastructure, his support of the Export-Import Bank and the need for greater collaboration around workforce development and the federal government’s role in making this happen.

Also on Sunday, Bill Generett, president and CEO of Urban Innovation 21, and Brenda Tate, founder of BT Consulting Services, join us to discuss a unique partnership between Urban Innovation 21 and global law firm Reed Smith to drive investment in underserved communities in Pittsburgh.

This week on CBS 21’s “Face the State with Robb Hanrahan,” we tackle the tough issues surrounding the events in Charlottesville, Virginia. Triad Strategies Kirsten Snow joins Penn Live’s John Micek and CBS 21 Political Insider Charlie Gerow. Stay tuned for a heated exchange between Gerow and Micek that grew so hot at one point the words “shut up and listen!” were tossed out. Join us for the most talked about political show on local television, “Face the State with Robb Hanrahan” Sunday morning  at 8:30.

Host Matt O’Donnell and the Insiders discuss the defacing of the statue of former Mayor Frank Rizzo in Center City Philadelphia.  Should the statue be moved based on his history with African-Americans during his tenure?  Which leads to a discussion on confederate monuments  – Should these figures remain erected to be honored or serve as a marker for history?  Our panelists also discuss the tragedy in Charlottesville, VA, the rise of the ‘Alt Right’, President’s Trumps remarks, and how Gerrymandering affects voting in Pennsylvania.   Catch the Inside Story .. Sunday at 11:30 am on 6abc.

After the tragedy of Charlottesville, Virginia, there’s a growing, national controversy, over what to do with statues, built, to honor historical leaders, associated the Confederacy and slavery.

What should happen, to these monuments? Our four guests, have special insight, into this issue:

Andrew E. Masich, Ph.D. – is President and CEO of the Senator John Heinz Regional History Center, and an expert, on the Civil War.

Todd Allen, PhD – is newly-appointed, Special Assistant to the President and Provost for Diversity Affairs, at Messiah College, in Mechanicsburg, Pennsylvania – near Harrisburg – and has led a number of educational bus tours, sponsored by the PNC Foundation, to historic places in the American South, that were part of the struggle over slavery and racism.

Jason Phillips, Ph.D.  – is the Eberly Professor of Civil War Studies, at West Virginia University, in Morgantown, West Virginia, and teaches students about the American Civil War, and Reconstruction.  West Virginia played a critical role, in the Civil War, with divided political loyalties, and citizens fighting for both the Union and Confederate armies.

Kirk Savage, PhD – is the William E. Dietrich II Chair, in the History of Art and Architecture, at the University of Pittsburgh, and has written, extensively, about the significance of public monuments.

Please join Stacy Smith and John Allison, for this very timely and important discussion, Sunday morning@11:30AM., right after CBS’ “Face the Nation”, for the “KD/PG Sunday Edition”, on KDKA-TV.

This week’s Pennsylvania Newsmakers features Tanya Barton, Vice President of Graduate Programs for Success Division at the Milton Hershey School, who discusses how they help high school students prepare for postgraduate programs. Then, joining host Terry Madonna are Brad Bumsted, Bureau Chief of The Caucus, and Paula Knudsen, The Caucus’ Investigative Reporter, for a discussion of legal public corruption and moonlighting in the state legislature..  Link here.

Washington County, Pennsylvania is fighting back, against the opioid crisis, as it battles against the powerful killer drug, fentanyl, that is being brought into the county, from China.

Finally, we’ll tell you why Duquesne University is making a renewed effort, to carry out the goals of its Spiritan founders’ mission – through the appointment of its first Vice-President for Community Engagement, William Generett, Jr., J.D.  We’ll hear from Bill Generett, about ways that Duquesne plans to use its impressive educational resources, to make Pittsburgh a stronger community.