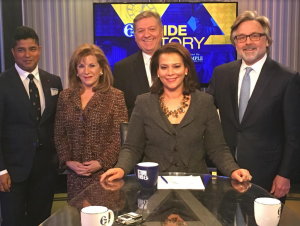 Here’s what’s on tap for this week’s NBC10 @ ISSUE- our host this week is NBC10’s Rosemary Connors.

What is Happiness? We explore the science behind happiness with a local expert from Penn, Carin Rockind.

Born too Soon. NBC10’s Tracy Davidson discusses a recent report card by the March of Dimes on  preterm births in our area with Dr. Michal Elovitz -the director of the Maternal Health Research Program at the University of Pennsylvania. The March of Dimes calls the report card “A step backwards for the U.S.”

This week we sit down with Senator-elect Mike Regan.

Host Tamala Edwards and our Insiders took a deep dive into a few topics: Ongoing negotiations for the Philadelphia Teachers Union Contract; PA Prosecutors outlining new gudelines for police involved shootings; will Mayor Kenney’s infrastructure rebuild include new diversity measures; should medical marijuana dispensaries be placed near schools; and was it the right move to for local congressmen to re-elect Nancy Pelosi  as House Leader in the midst of a changing democratic party.

A very special broadcast, exploring the life of one of Pittsburgh’s greatest sports icons – four-time, Super Bowl winning Pittsburgh Steelers’ head coach – Chuck Noll. We’ll talk with Michael MacCambridge — the author of a new book, published by the University of Pittsburgh Press — “Chuck Noll: His Life’s Work”. MacCambridge’s painstaking research reveals the life story of Chuck Noll — a public figure – who, ironically, was very private, about his career and family.

This week’s Pennsylvania Newsmakers features Russell McDaid, CEO of the Pennsylvania Health Care Association, who talks about how families can discuss and consider long-term care options. Then, joining host Terry Madonna are journalists Steve Esack of the Allentown Morning Call and Marc Levy of the Associated Press, for an update on the Green Party’s efforts to obtain a general election recount, and the possible layoff of state employees from unemployment compensation offices. Link here.

Fidel Castro was the third-longest serving, modern head of state – whose dictatorship altered Cuban life, for fifty years. We’ll talk about his death – last weekend – with a Cuban-born Pittsburgher, who works with her veterinarian daughter, at the Big Easy Animal Hospital.

Our guests include Dr. Aileen Ruiz, DVM – Veterinarian/Owner of the Big Easy Veterinary Animal Hospital, in Lawrenceville – and Mayra Gomez – her mother – who fled Cuba at the age of eight during the “Peter Pan” flights. Mayra is now Client Relations Supervisor, at Big Easy Animal Hospital.

Then, the story of 84 Lumber’s commitment to charitable causes, including a recent gift of $15,000, to Pittsburgh Steeler running back DeAngelo Williams’ Foundation, to help underwrite the cost of mammograms. (Williams’ mother died from breast cancer, at the age of 53). Becky Mancuso – Vice-President of Marketing and Public Relations at 84 Lumber tells Jon Delano why  84’s “Building Hope” effort is an important part of that company’s mission.