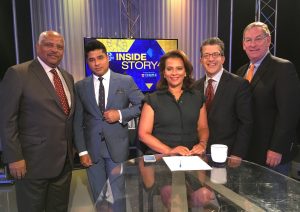 Hot topic week: Security at state Capitol following VA shooting and the pension bill. What does it do? What doesn’t it do? Our analysts discuss. And a teacher and police officer debate a Senate bill that would allow teachers to be armed in PA classrooms.

Slot machines could soon be on the menu in Pennsylvania restaurants and bars.  Some lawmakers are better that and other gambling changes will boost state revenue, others say it’s a bad deal for seniors and schools.  Today we’ll hear from both sides.  Glenn’s summer forecast.  Will we sizzle like last year or will it rain more than usual? Chief meteorologist Glenn “Hurricane” Schwartz is here with some answers. And fact check! Can workers thank Mr. Trump for a new coal mine in Pennsylvania? The President thinks so.  We’ll tell you if our partners at FactCheck.Org agree.  Our host is NBC10’s Erin Coleman.

This week we sit down with Senator Mike Regan – also a former U.S. Marshal – for insight into the state budget, the congressional shooting, and other topics.

Host Tamala Edwards interviews our Newsmaker – Philadelphia City Council President Darrell Clarke (D) fresh off delivering the FY18 budget to Mayor Kenney.  He spoke of the changes to REBUILD Plans and Soda Tax, gun control efforts and the teacher’s contract.  Our Insiders tackled the optics of the Cosby Trial, REBUILD funding, the League of Women Voters addressing Gerrymandering districts in PA, and NJ Gov Christie’s proposal for the Lottery to solve pension funding issues. Will that solution work for PA State pension reform?  Catch the Inside Story Sundays at 11:30 am .. and archived shows on 6abc.com/InsideStory

Fast-moving developments, this past week, in Special Counsel Robert Mueller’s investigation into whether Russia interfered in the results of the 2016 American Presidential election.

How would a decision by President Trump, to fire Mueller – affect the case?

Our special guests are — J. Alan Johnson, J.D. – former United States Attorney for the Western District of Pennsylvania (appointed, by President Ronald Reagan – serving from 1981-1989) and now, “of counsel” to the law firm of Jones, Gregg, Creehan & Gerace, LLP – and Laurel Brandstetter, Esq. – former Senior Deputy Attorney General for Pennsylvania, and former state prosecutor — who is now a partner, with the law firm of Schnader Harrison Segal & Lewis, LLP.

Please join Jon Delano and John Allison, for this important broadcast – Sunday morning@11:30AM., right after CBS’ “Face the Nation” – on the “KD/PG Sunday Edition”, on KDKA-TV.

Pittsburgh’s growing reputation as a major center for medical research and treatment has received a big boost. This past week, Highmark Health announced a 200-million-dollar investment in a new , academic cancer institute facility – on the campus of Allegheny General Hospital.

It’s part of a growing collaboration with the prestigious Johns Hopkins University, in Baltimore, and Highmark Health’s partnership with the Allegheny Health Network (also, a Highmark Health member) — which operates Allegheny General, and other medical facilities.

Then, the potential impact of another, one-quarter percent hike, this past week, by the Federal Reserve, in the prime lending rate. What impact will that have – on your ability to buy a car, or pay your mortgage?

And – we’ll talk about a bill – signed into law, a week ago, by Pennsylvania Governor Tom Wolf, that received rare, bi-partisanship support. It makes major changes in the pension system – for state employees.

Sen. Jay Costa(D)PA. 43rd Senatorial District (Allegheny County) will discuss the implications of this important legislation, on workers, and taxpayers.

Please join Jon Delano, this Sunday morning, for “The Sunday Business Page” @6:30AM., on KDKA-TV!