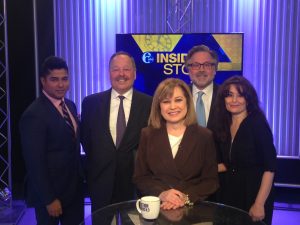 Actor Robert De Niro opens up to NBC10 @Issue about his son who has autism.  De Niro blames the teens condition on mercury in vaccines, even in the face of overwhelming scientific evidence that finds no link between vaccines and autism.

The NFL Draft comes to Philly next month.  Its another touchdown for the city, but what’s in it for the locals?

And the story behind a popular Saint Paddy’s Day treat, Irish potatoes, you might be surprised how the Philly tradition got started.

Our host is Erin Coleman

Our guest this week is State Representative Kristen Phillips-Hill.

6abc Host Monica Malpass and the Insiders dissect Mayor Kenney’s Budget Proposal, discuss how the Philly D.A.’s race is shaping up after the filing deadline, Gov. Wolf makes a quiet declaration that he’s running for re-election and is the PA Legislature proposing a new revised bill to ease gun registration rules?  Plus a heated discussion on the lack of political representation for women in Pennsylvania as the region recently celebrated International Women’s Day.  Catch the Inside Story …Sunday at 11:30 am

A very special program, about ONE family’s noble efforts to use their own, tragic fight against Alzheimer’s Disease – to help others, facing the same struggle.  Pittsburgh author Niki Kapsambelis has written a gripping account of this odyssey, and recent scientific advances in this field – in a book, just released – called – “The Inheritance: A Family on the Front Lines of the Battle Against Alzheimer’s Disease”. Also joining us, is Andreas Pfenning, Ph.D. – Assistant Professor at Carnegie Mellon University’s Computational Biology Department.  Pfenning is part of a research team, that is attempting to use their genetic findings to create new therapies, for Alzheimer’s Disease.

Do not miss this inspiring and important broadcast – on the “KD/PG Sunday Edition”, Sunday morning@11:30AM., on KDKA-TV!

This week’s Pennsylvania Newsmakers features Carol Kuniholm, Chair of Fair Districts PA, for a discussion of the gerrymandering of the state’s congressional districts, and the proposal to amend the state constitution to provide for a citizen conducted process. Then, joining host Terry Madonna are Jim Barbarich, CEO of Members Choice Credit Union (Danville) and Patrick Conway, President and CEO of the Pennsylvania Credit Union Association, for a discussion of data breaches and credit card protection.  Link here.

The growing presence of the petrochemical industry in Southwestern Pennsylvania is good news – for Lawrence County’s economy.  We’ll talk with Dan Vogler (R) County Commission Chairman, Linda D. Nitch – Executive Director of the Lawrence County Economic Development Corporation, and Scott Whipkey – a geologist with RAR Engineering Group – about their efforts to attract new businesses to their area, to share in the economic growth.

Then, Rep. Dan Miller (D)PA. 42nd Legislative District (Mount Lebanon) and Doug Muetzel – CEO of Wesley Spectrum – a non-profit organization that provides a variety of services for children and youth, battling autism and other mental health challenges  — will give you a preview of an important summit, this month. The event will assist these families – in finding the right resources, to make their children’s battle, a little easier.

Finally, the inspiring story of the Neighborhood Ford Store – and volunteers, in the “Quilt for the Cure” – part of ANOTHER battle — against breast cancer. Quilters – are making patches, for special quilts, for breast cancer survivors, and their families. It’s part of Ford’s “Warriors in Pink” campaign. Our guests include Kathleen Wagler – Vice-Chairperson of the Neighborhood Ford Store and owner of Crivelli Ford, in Hopewell, Pennsylvania, Beaver County, and Helen Carson – a volunteer quilter, from Latrobe, Westmoreland County. Both guests are breast cancer survivors – themselves.