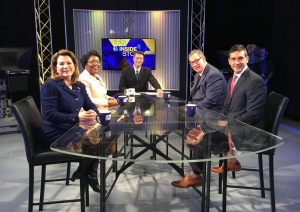 We are discussing the pros and cons of jumping into the medical marijuana business now that it’s legal in all three local states.

State Rep. Stan Saylor is on the program this week, talking budget and presidential politics. Tony, Charlie and R.J. Harris are in the studio for commentary.

Host Matt O’Donnell and our Insiders dive deep into the issue of how our political landscape has drastically changed over this presidential election cycle. Whether Republican or Democrat, or somewhere in between…the rules have changed…and now – where do we go from here in both national and local politics. Also discussed – the City’s stop & frisk policy, the new proposed policing requirements and the Sugar, Sweets and Beverage Tax proposal. Catch the Inside Story…Sunday at 11:30 a.m. on 6abc.

On this week’s broadcast – Donald J. Trump is now the presumptive nominee for President of the United States on the Republican ticket, after a convincing win – last Tuesday – over Senator Ted Cruz of Texas and Governor John Kasich of Ohio. Both opponents suspended their own presidential campaigns, after Trump’s victory.

Is Donald Trump’s expected nomination good news, or bad news, for Republicans – in general – and conservatives, within the Republican Party – in particular?

We’ll talk with two people from Southwestern Pennsylvania, who were elected as Republican delegates to the July G.O.P. National Convention in Cleveland, Ohio. Both Thomas Uram – of Eighty-Four, Pennsylvania – a financial services businessman, and former chairman of the Republican Party in Washington County – and Monica Morrill – from Somerset, Pennsylvania – active in the women’s Republican Party movement —  say they will vote for Trump for President – as delegates. You’ll hear their reasons why.

Then, we’ll receive a different perspective of Campaign 2016 from Jay Cost – Staff Writer for the Weekly Standard – a conservative magazine – who says he will not vote for Donald Trump – and Philip J. Harold, Ph.D. – Professor of Political Science, at Robert Morris University – who provides interesting insight, about the shifting landscape of American politics – both Republican and Democratic.

WBPH (Lehigh Valley and Philadelphia) Monday, May 9th at 8:30 PM

This week’s Pennsylvania Newsmakers features W. Russell McDaid, President and CEO of the Pennsylvania Health Care Association, for a discussion about the steps to take before retirement and entering long term care. Then, joining host Terry Madonna are journalists Angela Couloumbis of the Philadelphia Inquirer, and Steve Esack of the Allentown Morning Call, who provide an update on the state budget and public corruption. Link here.

On this week’s broadcast – there’s a growing need for skilled workers, in Pittsburgh’s workforce (partially, due to the retirement of “baby boomers”) – with shortages of qualified personnel in the construction, manufacturing, and utilities sectors. How can those looking for work – and those looking for the right employees – solve the problem? That was the topic of a special panel discussion, this past week, at Community College of Allegheny County (CCAC). Our guests, who participated in that event – Theresa Bryant – Vice-President of Workforce Development at CCAC – and Stefani Pashman – CEO of the Three Rivers Workforce Investment Board – talk with Jon Delano about how and where to receive the proper training for good jobs of the 21st Century – and the transformation of Pittsburgh’s economy.

Then, plans for a changing of the guard, at Washington & Jefferson College, in Washington, Pennsylvania, Washington County, as their President – Tory Haring-Smith, Ph.D. – announced, this past week,  that she will retire, next year, after a dozen years, on the job. She joins Jon Delano, for insight into W &J’s growing impact on both Washington County and Southwestern Pennsylvania – and their economic growth.

Finally, the fascinating story of a Kane, Pennsylvania, McKean County native – who left the forests of Northwestern Pennsylvania, for Laguna Beach, California.  For William Wooditch – his journey – as a successful salesman and motivational speaker – was a matter of looking forward! Wooditch discusses his new book –“Always Forward! Discover the 7 Secrets of Sales Success” – with lessons for both work – and life.

Please join Jon Delano, Sunday morning at 6:30 a.m., for “The Sunday Business Page” – on KDKA-TV – and have a Happy Mother’s Day!