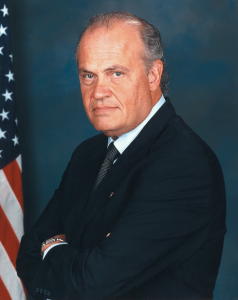 PoliticsPA caught up with Thompson after a host of media and editorial board briefings, including an appearance on WITF’s Smart Talk, a press briefing in 148 Main Capitol and meeting the co-sponsors of Tom Creighton’s HB 1270 (aka the National Popular Vote Initiative).

“We elect everyone from homecoming queen to our governors by the system of one person, one vote but not our president,” Thompson said. “I think, first of all, we have to understand how it is now. Only a handful of states get all the attention. Candidates load up in the big cities of the big states and under NPV there would still be a little bit of that, but it won’t be as exclusive as it is now. [Time and money] will be more dispersed around the country.”

However, NPV won’t take effect until the 270 votes needed to win the presidency are represented in the interstate compact. Approximately half of that number are represented now and it is not likely that NPV will be passed in states representing the other half before the 2012 election.

Thompson is remaining hopeful. “There is a chance that it might come about for next presidential election but a better chance for the election after…A lot depends on what happens here, in Pennsylvania.”

Eight of the state’s 50 senators and 35 of its 203 state representatives are already co-sponsoring this plan and the presence of three nationally known Republicans supporting NPVI is an effort to show the true bipartisan nature of the campaign. .

The issue has received heightened attention since PA Sen. Majority Leader Dominic Pileggi (R-Delaware) floated a proposal to switch Pennsylvania’s Electoral College from the current winner-take-all system, to one based on outcomes by congressional district. NPVI sought to capitalize on the increased public attention to the Electoral College earlier this fall with a media buy in the Harrisburg area.

“NPV is the only plan that guarantees one person to one vote. There are lots of ways to determine how to distribute electors. [The congressional plan] will continue the same problems that we see today,” he said.

A poll conducted this past spring showed that 2 out of 3 Pennsylvanians support the NPVI legislation compared to last week’s Quinnipiac poll showing that voters in the Commonwealth prefer the current operation of the Electoral College to Pileggi’s plan 52 to 40 percent.