For the first time since August, Republicans will air presidential campaign ads in Pennsylvania. Restore Our Future, the pro-Mitt Romney super PAC, is planning a $2.1 million Pa. buy for the final week of the election.

The news was first reported by Politico.

Another PAC, Americans for Job Security, is pouring $1.1 million into the Philadelphia market. 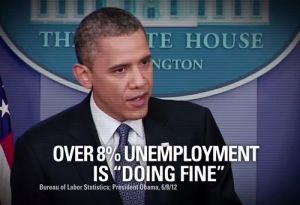 “Welcome to the new normal, where over 8 percent unemployment is doing fine,” says the ROF ad announcer. “And millions of Americans have simply given up, where our children will grow up under the weight of crushing debt, in a world where America is no longer the leader, and we’re told we’re going forward, even as we fall further behind.”

ROR was last on television in August. No presidential campaigns or PACs have been up in Pa. since September – except a pair of Democratic super PACs which went up in Pittsburgh last week. However, they only went on in Pittsburgh because the market bleeds into hyper-competitive Ohio.

Republicans had toyed with the idea of a Pa. push for weeks, as polling shows the race in low single digits. However, other states proved more alluring targets for a potential GOP pickup.

“A last-ditch effort by Mitt Romney’s special interest allies to fund dishonest attacks on President Obama won’t change the minds of Pennsylvania voters. For months, Romney has struggled to connect with Pennsylvania voters because of his record outsourcing jobs, rolling back women’s access to healthcare, and cutting investments in education. Now, he’s turning to special interests to write unlimited checks and hope that something sticks.”