Sometimes all you need to make a splash is a little pluck and $5,000. 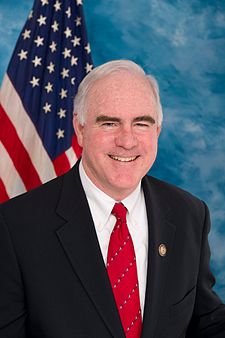 Accountability PA, the independent group operated by two former Bryan Lentz campaign staffers, has elicited a cease and desist letter from the Meehan campaign over a Medicare themed ad airing the Philadelphia area.

The ad, which has aired a handful of times over the past week, criticizes Meehan for his vote in favor of Rep. Paul Ryan’s budget plan. PoliticsPA determined that the group was spending only about $5,000 on the 30 second ad, which has aired on ABC and Comcast in Delaware County and is scheduled to run through the end of the week.

Puppio notes that because Accountability PA is an independent group – not a candidate’s committee – the TV network is responsible for its content. He adds – correctly –  that Accountability PA was recently founded by two former staffers of their 2010 congressional opponent and is far from unbiased or independent.

One network, NBC 10, has already turned down the ad.

Update: NBC 10 Publicist Kathleen Burke gave the following explanation for her network’s decision not to run the ad Sunday during “Meet the Press.”

“We thoroughly reviewed the ad in question and determined that the organization did not provide adequate substantiation for the claims that were made.”

The complete letter, which Accountability PA spokesman Bob Finkelstein emailed reporters earlier today, is posted at the bottom of this article.

“Congressman Meehan’s actions speak for themselves, and given the extensive substantiating evidence we have submitted for the ad’s claims, we are confident it will be verified as truthful and accurate,” said Finkelstein.

But when it comes to the content of the ad, who’s right?

The Meehan camp is correct in its assertions that the Ryan budget would not bring an end to Medicare. They cite numerous articles published by the non-partisan Politifact website which debunk the claim – made in a different ad from the DCCC – that the GOP budget would “end Medicare.”

However, the Accountability PA spot uses less direct phrasing, alleging that the GOP budget would to “end Medicare as we know it.”

Semantically, any reforms to Medicare could be said inherently to end the program “as we know it.” The real question is, are the changes significant enough to make such a claim intellectually honest? Yes.

While Politifact has designed the “end Medicare” line as “pants on fire” false, the organization determined another claim, that the GOP budget would privatize Medicare, is mostly true. They gave the same rating to a claim by President Obama that a decade from now, seniors would have to pay on average $6,400 more out of pocket under the GOP plan.

Debatable? Sure. But far from “blatantly and wholly false,” as the Meehan letter states.

As to the second claim, that Meehan lied to voters, again Accountability PA’s ad is fair game. In an October forum, Lentz directly challenged Meehan about the Ryan budget. Not abstract claims of ending Social Security or ending Medicare, but Rep. Paul Ryan’s budget specifically. Here’s the exchange, part of which is featured in the Accountability PA ad. Watch the complete video of the debate here.

“Read the plan that Paul Ryan, who is the star of the caucus Pat hopes to join, turning Medicare into a voucher program, privatizing Social Security,” Lentz said. “So, he may not be willing to admit that that’s the agenda of the Republican party in Washington, DC. but it is in fact the agenda. The agenda of a party he hopes to put into power.”

“That’s the agenda I’m not voting for. That’s the first and most important thing,” Meehan replied, before moving to another subject.

Meehan’s response when the debate video was posted in April (by one of the people now involved with Accountability PA), was that Lentz’s initial comment was a mischaracterization of Rep. Ryan’s plan, and thus a vote for it was not a flip-flop.

Clarification: Additionally, the plan referenced by Lentz during the debate is Ryan’s 2010 “American Roadmap” plan, which targeted Medicare far more aggressively than his 2011 “Path to Prosperity,” for which Meehan voted.

However, Meehan said in October that he would vote against Rep. Ryan’s plan and in April he voted for another, similar one. There can be a valid disagreement over semantics here, but it is inaccurate to call the ad “false,” or “plainly defamatory.”

In summation, political ads and campaigns have been fought and television ads aired on far less substantive arguments than the Accountability PA ad presents. For example, in 2010 Politifact debunked the talking point that ‘Obamacare’ constituted a “government takeover of health care.” But all the cease and desist letters in the world couldn’t prevent that argument from getting on the air and having a major impact on the election.

Democrats spent too much time last year trying to explain why negative claims about the health care plan were inaccurate, and too little time trying to articulate the benefits of their policy. Republicans took advantage of that, and used their superior messaging to great effect. When it comes to Medicare in 2012, Republicans would do well to remember how they won in 2010.

It has come to our attention that Accountability PA has purchased air time on your cable network to run a negative advertisement that is to begin airing on Monday, August 15, 2011, targeting Congressman Pat Meehan, a Member of the U.S. House of Representatives for Pennsylvania’s 7th Congressional District (“the Advertisement”). Accountability PA was founded by two political operatives who worked as paid staffers for Meehan’s opponent inthe 2010 election. The Advertisement is blatantly and wholly false, and has been deliberately crafted to mislead and frighten voters about certain provisions in the Republicans’ Budget Resolution for Fiscal Year 2012 (“the Budget Resolution”). Similar advertisements been judged false by PolitiFact, a nonpartisan, Pulitzer Prize-winning project of The St. Petersburg Times.[1]  Furthermore, comparable claims have been debunked by FactCheck.org, the nonpartisan project of the Annenberg Public Policy Center.  Thus, because the Advertisement conveys messages plainly disproven by fact, I respectfully demand that your cable network refuse to air the Advertisement and that no airings of this misleading content be allowed on your cable network.

These statements are completely false. First, the Advertisement is likely referring to an April 15, 2011 vote in the U.S. House of Representatives to pass the Budget Resolution. The Budget Resolution did contain provisions to address the future of Medicare. However, there is simply no way to interpret the Budget Resolution, either on its face or by its effect, to “end Medicare as we know it” or to “privatize Medicare.”

Furthermore, the Budget Resolution as approved by the U.S. House of Representatives does NOT privatize Medicare.  As discussed above, under the proposal, all seniors would continue to be offered coverage under Medicare.  In fact, the claim that seniors would be subject to the open marketplace has been called false.  Factcheck.org said, “[i]t’s false to say seniors would be in the ‘open marketplace.’ Instead, they would buy coverage through the Medicare exchange Ryan envisions. And as we said, the private insurance companies in the exchange would be required to cover any eligible senior who wanted insurance.”[4]

In addition, it bears noting that PolitiFact also pointed out that the Budget Resolution, like all budget resolutions, is a non-binding document that does not establish law. A Budget Resolution cannot “end” or “privatize” Medicare, or any government program for that matter. In sum, PolitiFact concluded its review of the claims in the similar advertisement by giving the similar advertisement an overall rating of “Pants on Fire” – declaring it as false as any advertisement could possibly be.

Broadcast licensees have a legal responsibility to review and to eliminate any false, misleading, or deceptive materials contained in advertising. We urge you to recognize Accountability PA’s blatant disregard for the truth and we respectfully demand that your network refuse to air this false and misleading Advertisement. We further request that you reject any attempts by Accountability PA to purchase time for the future airing of this Advertisement because of its material misstatements of fact and blatant disregard for the truth of the matter.

I ask that you please contact me at your earliest convenience to advise as to your cable network’s actions(s) with respect to cessation of the airing of this Advertisement. I will contact you later today if I have not heard from you by late afternoon.

Thank you for your prompt attention to this matter.  I will anticipate your immediate response.