Republican critics recently said they feared that Democratic Attorney General hopeful Kathleen Kane would be too much like a certain New York politician, they were talking about former NY AG Elliot Spitzer and the way he went after big banks.

Maybe they should have been worried about another New York politico. 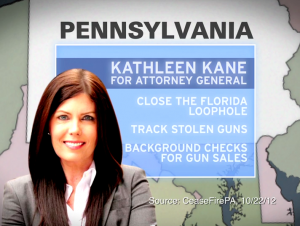 “Kathleen Kane: close the [Florida] loophole and keep guns out of the wrong hands. Track stolen guns to choke of supply to criminals. Background checks for all gun sales,” says an announcer in the ad paid for by Independence USA PAC.

“David Freed? Endorsed by the NRA. Thinks ne gun laws aren’t the answer. Good for the NRA, wrong for us.”

Update: The ad is airing on cable and broadcast in the Philadelphia market to the tune of over $600,000, according to a spokesman for the PAC.

Southeast Pa. is the one part of the state where an NRA endorsement doesn’t bring an overwhelming positive.

Freed Campaign Manager Tim Kelly said the ad was hypocritical give Kane’s past criticism of outside groups in the race.

“The hypocrisy that Kathleen Kane has demonstrated throughout this campaign is staggering. On one hand Kane calls for outside groups to ‘get out of Pennsylvania’ while on the other hand she accepts hundreds of thousands of dollars from these organizations. It’s clear that Kane is very much a part of the filthy, backroom politics she’s tried so hard to convince voters she is against.”

There is a substantive policy difference between the two. Kane has run since the Democratic primary as the gun control candidate, even using the issue to criticize her opponent former Congressman Patrick Murphy.

Here’s the Harrisburg Patriot-News report on where Kane and Freed stand on gun issues:

Freed doesn’t support a law that would criminalize failing to report a lost or stolen handgun. He was involved in negotiations with lawmakers on a number of gun-related issues, including the expansion of the Castle Doctrine, which covers the use of force to protect oneself. Freed praised the recent passage of legislation designed to ensure that people who illegally buy guns for criminals face at least five years in prison.

“That’s the kind of important legislation we need. We need to have effective gun laws effectively enforced. I see this [reporting of lost or stolen firearms] very clearly as an enforcement issue,” Freed said.

“Lost or stolen does not affect Second Amendment right to own a gun. All it does is give an affirmative duty upon a gun owner that if their gun is lost or stolen, they must report it to police. That gives prosecutors the tools that they need” to go after people who buy guns illegally for criminals, she said.

She favors closing the “Florida loophole,” which allows someone who was denied a concealed-carry gun permit in Pennsylvania to obtain one from another state and then transfer that permit to this state.

On this issue, Freed supports giving gun owners six months to obtain a state permit to carry to avoid infringing on rights of law-abiding gun owners.