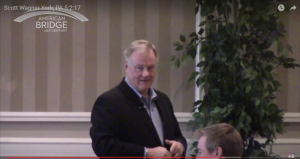 At an event at the Country Club of York, Gubernatorial candidate and state Senator Scott Wagner physically confiscated a camera from a tracker who was filming his speech.

The tracker works for American Bridge 21st Century Bridge, a progressive super PAC.  Wagner told the Philadelphia Inquirer that the speech was not related to his campaign, it was about estate planning.

“You’re about to see your Senator in action,” Wagner is heard saying in the video before he confronts the tracker.

“You just assaulted me,” the tracker says in the second video.

“No, I didn’t assault you,” Wagner responded.

Trackers have become a mainstay of campaigning and opposition research firms looking to catch high profile candidates saying embarrassing or controversial things on the trail.  The voice of the tracker at the event sounds like it may be the same tracker American Bridge used in central Pennsylvania during the 2016 election.

“If Scott Wagner can’t handle the pressure of the campaign trail, what makes him think he can handle leading the state of Pennsylvania,” American Bridge spokeswoman Lizzy Price said in a statement.

These videos are likely to encourage Wagner’s opponents – Democrats and Republicans alike – to track him even more. Wagner is currently the only official candidate in the race to challenge incumbent Governor Tom Wolf, but Allegheny county businessman Paul Mango has set the date for his own announcement.  House Speaker Mike Turzai (R-Allegheny) is exploring a bid for Governor.  Former Lieutenant Governor Jim Cawley, Congressman Mike Kelly (R-Butler), and state House Majority Leader Dave Reed (R-Indiana) are also rumored to be weighing a bid for Governor.

Full disclosure: the author interacted with American Bridge trackers during my tenure at the Pa. Republican Party.

The videos can be seen below: