The two Democrats — now running together after Fetterman beat Lt. Gov. Mike Stack in the primary — appeared together Wednesday in a Twitter video that poked fun at Fetterman’s dress sense and imposing size. 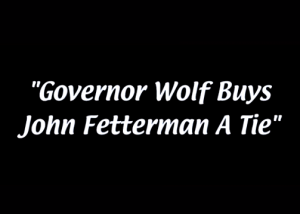 “John, I am really looking forward to working with you to change Harrisburg,” Wolf says. “Now there’s one thing … You’re going to be presiding over the Senate, and to preside over the Senate, apparently you have to wear a necktie.”

“A tie?” an incredulous Fetterman replies before Wolf offers to take him shopping.

The ad is appropriately Pennsylvania-centric: the pair shop at Boscov’s, founded in Reading, and the video features a title card and music styled after the FXX comedy “It’s Always Sunny in Philadelphia.”

They take a moment to mock Scott Wagner, Wolf’s opponent in the general election, for “saying he’s a cross between Rambo and Dirty Harry” (a reference to a Wagner speech in which the GOP hopeful said he shares the personalities of John Wayne, Clint Eastwood and the fictional John Rambo).

The peacemaking follows past differences between the top Democratic candidates. In 2015, Wolf endorsed his former chief of staff, Katie McGinty, over Fetterman and former congressman Joe Sestak in their bid to unseat Sen. Pat Toomey.

It also offsets the pair’s first post-primary photo op, which had something of the optics of an awkward first date.

Wagner and his running-mate, SEPA businessman Jeff Bartos, have been in sync for months. They ran as a joint ticket in the May primary.

Wolf did not endorse a lieutenant governor candidate this year, with Stack dogged by controversies over alleged mistreatment of his staff.

The new duo seeking to run the state appear to have a better relationship, at least publicly. Whether it will rub off on Wolf remains to be seen. In the video, the famously tattooed mayor offers: “Maybe next time, governor, we’ll get you some ink.”

But the Wagner campaign was not about to be left out of the gang.

Andrew Romeo, Wagner’s communications director, characterized the ad as an attempt to distract voters from the significant policy disagreements between the two.

“Tom Wolf is desperately trying to avoid questions about his running mate’s anti-fracking, anti-pipeline, pro-single payer healthcare, guaranteed jobs for everyone positions, which are out of step with the majority of Democrats in Pennsylvania,” Romeo said. “It’s interesting that Tom Wolf and John Fetterman have room in their schedules to go tie shopping, but they view taking the time to stand on the debate stage and take questions from voters as a political gimmick.”