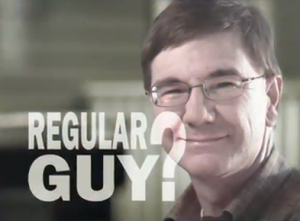 The onslaught of outside groups continued Tuesday morning in the 12th congressional district. The political arm of the American Federation of State County and Municipal Employees (AFSCME) is on TV with $325K to rebut Republican Keith Rothfus’s ‘regular guy’ ad.

Like his other ads so far this cycle, the Rothfus commercial is quirky and playful. It emphasizes in dramatic tones the normal things he does, like mow the lawn and take his kids to school.

The AFSCME spot starts with a quote from the original ad: “He’s a regular guy!”

“Don’t be fooled. Keith Rothfus is just a regular phony.”

According to Federal Communications Commissions filings by southwest Pa. television stations, the ad will run from today through Monday, October 8. The buy appears to be only for the Pittsburgh broadcast market, and the union has laid out at least $325,000 to air them.

The ad buy was placed by the Democratic media consulting firm the Campaign Group, which also does ads for Kathleen Kane for Attorney General, and did the 2010 ads for Joe Sestak’s U.S. Senate campaign.

The video is listed as an independent expenditure on AFSCME’s YouTube page.

The 12th district is Pa.’s most competitive congressional race. AFSCME joins SEIU, the Democratic Congressional Campaign Committee and the House Majority PAC on the air to slam Rothfus. The National Republican Congressional Committee has been on TV bashing  Rep. Mark Critz (D-Cambria), and will soon be joined by the YG Action Fund super PAC.

Both Critz and Rothfus are also on TV.

“Keith Rothfus has been on Wall Street once… as a tourist,” Raso said. “But Congressman Critz and his outside special interest groups continue to shamefully demonize the fact that Keith worked at a small firm here in Pittsburgh – on Stanwix Street, not Wall Street – that worked with BNY Mellon in their software negotiations.  By that logic, the 7,500 local employees at BNY Mellon are all ‘Wall Street workers’ – it shows you just how out of touch they are with Western Pennsylvanians.”