Barletta, Marino Among Trump’s Most Trusted Supporters in D.C. 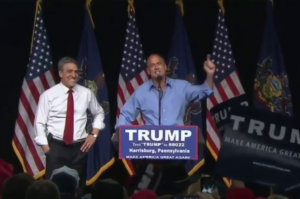 That’s according to Amber Phillips of the Washington Post, who ranked the top six Congressmen The Donald has the most trust in. Reps. Lou Barletta and Tom Marino ended up sharing fifth place.

“Okay, we cheated by putting two people in the fifth spot. But it’s tough to mention one Pennsylvania Republican without the other,” Phillips writes. “Trump insiders say both men’s endorsements were crucial in helping Trump win Pennsylvania in April.”

“That night, you’ll recall, was Trump’s five-state sweep in the Northeastern primary and seemingly the beginning of the end of the Republican nominating contests,” she continues. “Barletta is an immigration hard-liner who likes Trump’s idea to build a wall, and Marino, who represents a conservative, more rural section of northeastern Pennsylvania, told Politico that endorsing Trump was ‘one of my life-changing moments.’”

The two Congressmen were the first PA lawmakers to back the New Yorker, with Rep. Marino endorsing Trump on March 1st followed by Rep. Barletta on March 22nd.