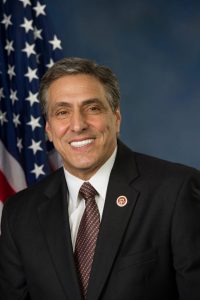 A former Luzerne County congressman and one time Senate hopeful will lead the Pennsylvania Republican delegation at the party’s convention next month.

Former Congressman Lou Barletta was voted to be the Chairman of the Pennsylvania Republican Delegates at the Republican National Convention where the party will formally nominate President Donald Trump.

Barletta shot out a tweet on Saturday saying he’s “honored” to have been voted for the position and is ready to work to reelect Trump.

“I am honored to have been voted Chairman of the @PAGOP Delegates for the @GOPconvention,” Barletta wrote in a tweet. “I can’t wait to see everyone in Jacksonville and work together to re-elect @realDonaldTrump!”

I am honored to have been voted Chairman of the @PAGOP Delegates for the @GOPconvention. I can’t wait to see everyone in Jacksonville and work together to re-elect @realDonaldTrump! 🇺🇸

The Times Leader reports that Barletta will be one of the six delegates that each state is sending to Charlotte to legally nominate President Donald Trump and Vice President Mike Pence for re-election, prior to attending the convention in Jacksonville, FL from Aug. 24-27.

Barletta was one of Trump’s earliest and most loyal supporters in Pennsylvania during the 2016 GOP primary. Barletta was the second member of the state’s GOP congressional delegation to formally endorse Trump in the primary, only behind then-Rep. Tom Marino (R-Lycoming).

Barletta and Marino co-chaired President Trump’s campaign in Pennsylvania in 2016, and were dubbed “thunder and lightning” by Trump.

Barletta was unsuccessful in his attempt to unseat Sen. Bob Casey in 2018 and gave up his seat in Congress in his quest to join the Senate.

Rumors swirled in 2019 that Barletta was mulling a run for Congress again, but announced in September 2019 that he would not run for office in 2020 and instead was placing his focus on his new “boutique consulting firm, Pioneer Strategies.”

Although he decided to not run in the 8th Congressional District, he is serving as the “honorary chairman” of GOP candidate Jim Bognet’s campaign.

16 thoughts on “Barletta To Lead PA GOP Delegation at Convention”