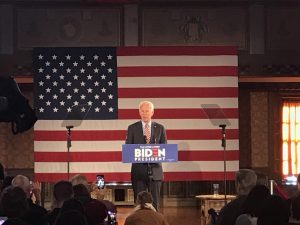 During the 45 minute speech at the Scranton Cultural Center, which included nearly 15 minutes of emphasizing the significance of growing up in the area and personal stories, Biden detailed how Scranton shaped his political career and helps him understand the values of the working class.

“Everything my sister, Valerie, and I learned, came from Scranton,” Biden, who spent the first 10 years of his life there, said. “Scranton sort of creeps into your heart and never leaves you.”

Biden pointed to areas like Scranton as the reason he entered the race for the presidency and credited middle class Americans for being the backbone of the nation, while placing a wedge between them and corporations.

“Let’s get something straight,” Biden said. “Wall Street did not build America.”

Biden painted a picture of two Americas in his address. The former Vice President said despite the current low unemployment rate that middle class Americans aren’t raving about the economy, while he said that “corporate america is doing incredibly well.”

A Quinnipiac poll from May shows that 71% of Pennsylvanians say the state’s economy is “excellent” or “good,” which is significantly higher than numbers from recent years. Trump and the Pennsylvania GOP often point to the current economic numbers as proof that the Trump agenda is working for the state. Biden said in his speech today that Trump inherited a “strong economy” from Obama and himself and said that he is in the “midst of squandering it.”

“Donald Trump inherited a strong economy from Barack and me,” Biden said. “Things were beginning to really move. And just like everything else he’s inherited, he’s in the midst of squandering it.” 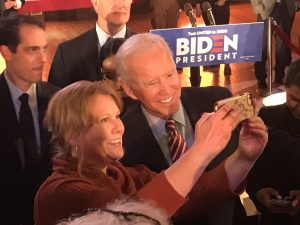 In his effort of portraying himself and Trump coming from different backgrounds and sharing different priorities, Biden offered a direct attack in hopes to portray Trump as out of touch with the concerns of most Americans.

“I’m not sure Donald Trump has any idea of what I’m talking about when I talk about the longest walk,” Biden said, referencing the struggles his family faced when growing up and having to move because of his father losing his job. “I think that the longest walk his father ever made was when his father put $400 million into his trust fund.”

The jockeying for support in Northeast Pennsylvania is well underway and is slated to be a key battleground leading into 2020. On Monday, Vice President Mike Pence delivered a speech boosting the the USMCA trade pact and firing shots at Biden’s position on the proposal in Luzerne County at Schott North America Inc. in Duryea. Prior to Pence’s arrival in Luzerne County on Monday, Biden criticized Trump and Pence in a statement to Citizens Voice, claiming that their trade policies are hurting American workers.

Trump made huge gains in both Lackawanna and Luzerne counties in 2016 in comparison with previous GOP presidential candidates. Trump carried Luzerne County by just under 20 points over Sec. Hillary Clinton after President Barack Obama bested Gov. Mitt Romney here by about 5 points in 2012. Clinton narrowly edged out Trump in Lackawanna County by 3.5 points, while Obama carried the county by 27 points over Romney in 2012.

The Pennsylvania Republican Party and the Republican National Committee both issued statements ahead of Biden’s address criticizing his position on the USMCA trade pact and saying that Trump will win the state again in 2020.

“The continued parade of Democratic Presidential hopefuls visiting Pennsylvania is no surprise.  Joe Biden knows President Donald Trump won Pennsylvania in 2016 and it will be key to his re-election in 2020,” said Charlie O’Neill PAGOP Deputy Executive Director. “We know that Biden, along with the rest of the far-left, socialists candidates, will find Pennsylvania is ready to keep moving forward rather than return to the stagnant economy of the previous administration.”

“On the campaign trail, Joe Biden alleges to ‘know Pennsylvania ’ yet refuses to accept a fairer trade deal which benefits the Pennsylvania workers he claims to represent,” RNC spokesperson Christiana Purves said. “Biden should quit the partisan double talk and acknowledge the great achievements that President Trump continues to deliver to Pennsylvania.” 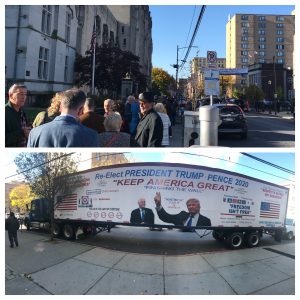 The divide of support in the area was on display prior to Biden’s speech. As spectators for the address lined up around the block waiting to see Biden’s speech in the morning, supporters of Trump set up shop across the street voicing their opposition of the former VP in the area. 400 people were in attendance for the address, the Scranton Times-Tribune’s Jeff Horvath reports.

A few hours after the address, Biden’s campaign released a new video titled, “A Kid from Scranton.”

Capping off an important day in the state, Trump will be in Pittsburgh to provide the keynote address at the annual Shale Insight Conference.