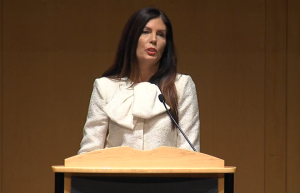 Kathleen Kane is stepping down from her role as Attorney General effective tomorrow.

“I have been honored to serve the people of Pennsylvania and I wish them health and safety in all their days,” Attorney General Kane said in her statement.

That quote was preceded only by the sentence: “Pennsylvania Attorney General Kathleen G. Kane today announced that she will resign her position as Attorney General effective at the close of business tomorrow, Aug. 17.”

Kane was found guilty on nine charges yesterday. Her sentencing hearing is set for October 24th.

Kathleen Kane was the first elected female Attorney General in Pennsylvania and was first sworn in on January 15th, 2013.

In January 2015, she pledged that she would not resign.

You can view the whole story using our comprehensive timeline.

UPDATE: Gov. Wolf has responded to Kane’s announcement that she will be resigning:

“What has transpired with Attorney General Kane is unfortunate. Her decision to resign is the right one, and will allow the people of Pennsylvania to finally move on from this situation.

“I have full faith and confidence in the employees of the Office of the Attorney General and know that they will continue to perform its most important functions including protecting consumers and prosecuting criminals. Moving forward, I will work with both Republicans and Democrats in the Senate regarding any potential appointment of an Attorney General.”

UPDATE 2: Bruce Castor will assume the office of Attorney General and hold it until until Gov. Wolf and the legislature agree on a replacement or in January when a new AG is sworn in.

Castor said he will remain as AG until Gov. Wolf appoints someone new and Legislature approves or new AG is elected & sworn in

UPDATE 3: Kane conducted an interview outside her office this morning on her tenure in office, in which she states “I don’t have any regrets.”