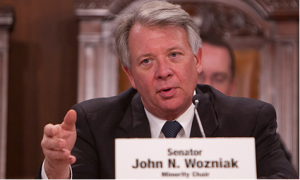 Today the lawmaker announced on his Facebook page that he is withdrawing from his re-election race this year.

“After long discussions with my wife, children, friends and colleagues concerning running for reelection, I have decided to withdraw as a candidate for another term in the state Senate,” he writes.

“If a person’s life is broken down by seasons, I believe I have been a public servant for a summer and an autumn,” Wozniak goes on to explain. “God willing, I hope to have several more seasons left and I would like to use them to seek new opportunities, pursue other ventures and life experiences.”

Richland Township Supervisor Wayne Langerholc announced his candidacy last December and will be serving as the Republican nominee.

The 35th district includes all of Bedford and Cambria Counties as well as parts of Clearfield County. It is one of the few seats in the middle of the state that Democrats still hold.

John Wozniak has held the seat since 1997, and first arrived to Harrisburg as a State Rep. in 1980. If Democrats don’t get a notable name to replace him this seat goes from being a prime pickup opportunity for the GOP to a practical lay-up.

PoliticsPA has heard from separate sources that the party is trying to get former Congressman Mark Critz to run. Critz appears inclined to accept but hasn’t made a final decision yet. State Rep. Bryan Barbin may also be interested.

We reached out to Critz but have not received a response.

“I would like to commend Senator John Wozniak for his more than thirty-five years of service to local residents at the state level of government. I wish him and his family well in their new endeavors.”

“While this campaign should be about issues and not politics, it is now clear that Governor Tom Wolf and powerful Harrisburg insiders will select the candidate to replace Senator Wozniak instead of local residents. The people of the 35th District are having their voice taken away by a few, powerful politicians, and that is just plain wrong.”

“As an Assistant District Attorney, I’ve protected local residents from dangerous criminals. As a public servant, I’ve protected taxpayers. That’s the record I have been running on. I plan to continue meeting residents one-on-one so they know where I stand, and what my priorities will be in office: fighting for our jobs, leading on government reform, cutting wasteful spending to protect taxpayers, and meeting the needs of local families and seniors. My focus will never be on politics, instead I will work with local officials and residents from both parties to best serve and support local families.”