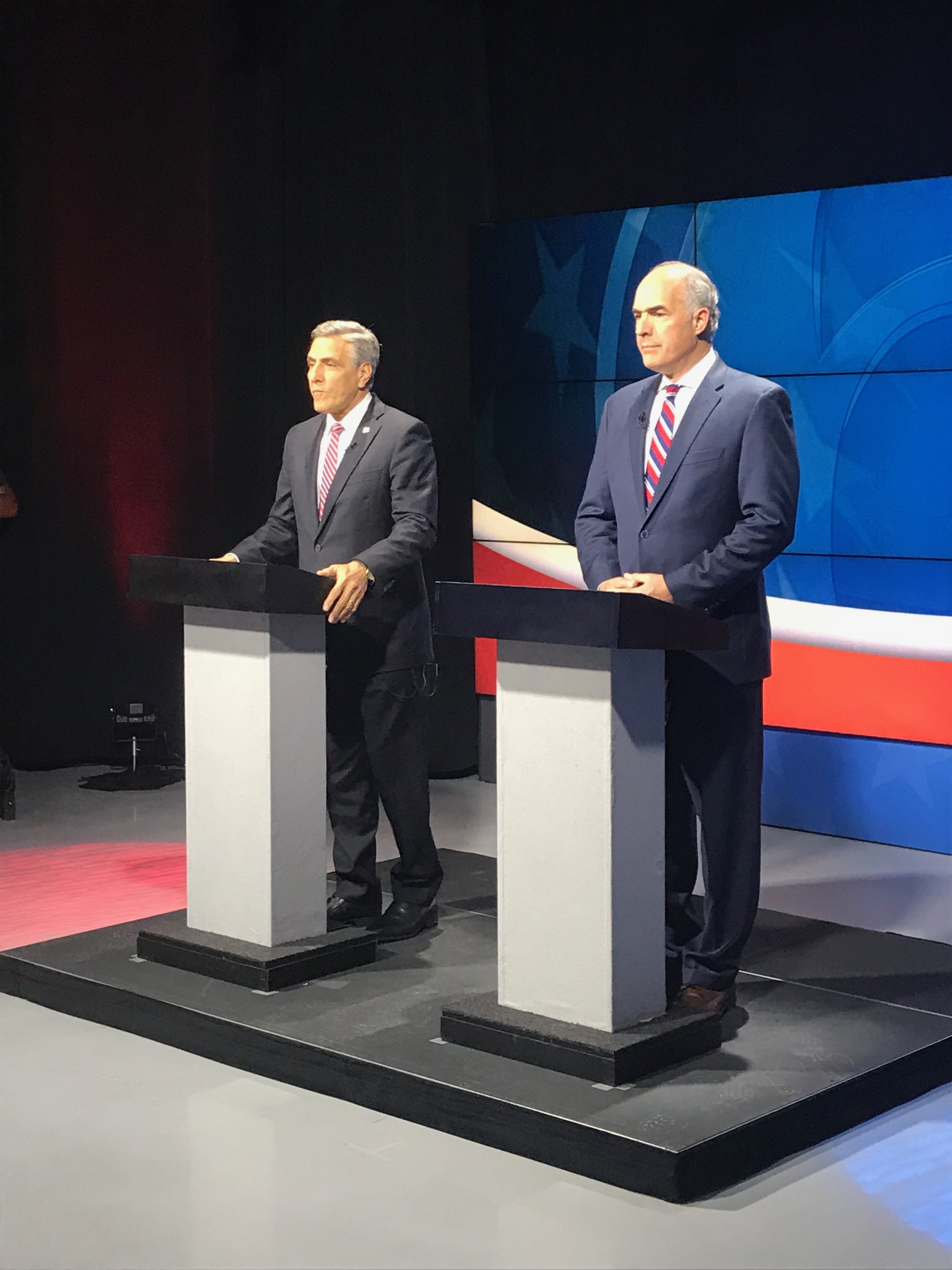 PHILADELPHIA- Incumbent Democratic Sen. Bob Casey and GOP challenger, Rep. Lou Barletta participated in their first of two televised debates at WPVI in Philadelphia today. The hour long debate which will air on WPVI and stream online starting at 11:30 am on Sunday that will be available to other TV stations, included fierce disagreements on the Affordable Care Act, the current state of the economy, special counsel Robert Mueller and ended with a personal back and forth between the candidates.

Barletta Wants The Ad Down, Casey Says He Didn’t Intend for the Ad to Cause His Family Pain

In the closing statements of the debate, Barletta pleaded with Casey to remove a television ad that he said mirrored the situation his family is currently going through with his 18 month-old grandson being treated with chemotherapy for cancer. The ad is no longer running in the Scranton market, but remains on the air in other parts of the state. “The ad is still running today as we speak, my family is still hurt, my grandson still has cancer…,” Barletta said. “Could you tell me why you did that? Why you won’t take the ad down?” The ad criticizes Barletta’s vote to repeal the Affordable Care Act. Casey said the ad was never meant to hurt his family and he was just trying to tell the story of another Pennsylvania woman’s twin daughters going through cancer treatment. “Congressman, if that ad caused you and your family any pain, I apologize for that,” Casey said. “It was never intended that way. “The reason I didn’t make the connection between that ad and your grandson was very simple; I was thinking about Stacie Ritter and her story and her daughters’ story about pre-existing conditions.” After the conclusion of the debate, Barletta told reporters that he wasn’t sure how sorry Casey really is about the ad if he is still running it in other parts of the state.

Casey Wants Legislation To Protect Robert Mueller, Barletta Wants the Investigation to Wrap Up and Does Not Support that Legislation.

The last question before the closing statement asked the candidates whether or not they’d support legislation to protect special counsel Robert Mueller and his investigation from being fired by President Trump. Casey said he “absolutely would” support this legislation and said there’s no question that there was election interference from the Russian government. “The American people want this investigation to be thorough…,” Casey said. Barletta was pressed on this very question several times until he said he would not vote for that bill and pinned Sec. Clinton of colluding with the Russians. “I would like to see the conclusion of this never ending probe that’s been going on and on and on for years,” Barletta said. “The only one that colluded with the Russians has been Hillary Clinton, your friend, that’s the only one… No, I’m going to say I wouldn’t vote for that if he’s going to go on for another 5 years…”

Barletta and Casey Agree the Deficit has increased, but see different ways in how it can be lowered.

The candidates finally agreed on one notion, the deficit is too high, however they see different factors that resulted in this. Barletta blamed President Obama for the increase in national debt and lauded the GOP tax reform bill and the Trump agenda as the reason he thinks the economy is doing well right now. “Why would we wanna stop this?” Barletta asked. Casey blamed the GOP tax reform bill for that he said was “rammed through” as the cause of the deficit increase. The Democrat sees the bill as benefitting the top 1% and dubbed it a “corporate special interests giveaway” and pleaded multiple times throughout the debate and in his closing statement for putting forth “middle class tax cuts.” Moderator, Jim Gardner asked Barletta if he believed that the GOP tax reform bill did increase the deficit, to which the Republican agreed, but thinks the tax cuts have already positively effected the economy and in the long run will help bring the deficit down.