Senator Bob Casey has joined the loud chorus of Democrats using the recently passed House GOP budget – and its changes to Medicare – to knock Republicans.

“If Republicans have their way, traditional Medicare will no longer exist in 2022. Instead, our elderly will get a voucher to purchase private insurance, but the voucher won’t keep pace with health care costs,” said Casey in a May 20 recent release. 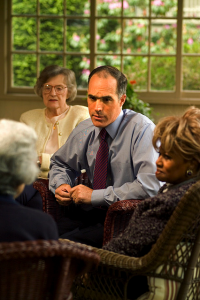 It’s a new tone for Casey, more pointed in its criticism of Republicans than the Senator has been in the past.

The press releases are part of the Senator’s efforts to highlight a new report from the Joint Economic Committee, which Casey chairs, which makes the case that out-of-pocket costs for Medicare beneficiaries under the GOP plan would double in every state including Pennsylvania.

“This new report shows just how costly the Republican plan would be to individuals and families who depend on Medicare,” said Senator Casey. “Pennsylvanians are concerned about the proposed Republican plan, and rightfully so. Future Medicare beneficiaries would be burdened with skyrocketing out-of-pocket costs, and current beneficiaries would lose critical preventive services like mammograms.”

That the GOP plan could jeopardize Medicare is a message that has dominated Democratic political strategy since Rep. Paul Ryan’s budget passed, and topic they believe will allow them to retake the House and keep the Senate.

Casey’s office disputes the suggestion that the Senator’s recent language is motivated by partisanship, saying instead that the Senator is doing his duty to protect Pennsylvania seniors.

“There has been bipartisan opposition to the House Republican proposal to end Medicare as we know it.  This bill is due to come before the Senate.  An accurate analysis of how that bill will hurt Pennsylvanians is important for the debate,” said Casey spokesman Larry Smar.

“As Chairman of the Joint Economic Committee, Senator Casey will examine the economic impact of legislative proposals. As a senator from Pennsylvania, he is very concerned about how legislation will impact Pennsylvanians.  The detailed analysis released by Senator Casey shows how out-of-pocket expenses for Pennsylvanians will greatly increase under the plan to end Medicare as we know it. This type of analysis is an important part of making sure everyone understands the impact of the House Republican bill.”

The impact would be far worse if Casey has his way, suggests National Republican Senatorial Committee spokesman Chris Bond, citing a common GOP counterargument to Democrats recent messaging. Namely, he says that Casey and Democrats lack a specific plan to reform entitlements, and inaction will lead to the bankruptcy of Medicare within a few decades.

“Given his election-cycle rhetoric on this issue, it’s notable that Senator Casey has yet to tell Pennsylvanians his own plan to save Medicare,” said Bond.  “Perhaps that’s because right now Casey’s only plan is to do absolutely nothing and let Medicare go bankrupt on the backs of Pennsylvania seniors, which is exactly what we know will happen without meaningful reforms.  Instead of parroting his Washington party bosses’ political attacks and trying to scare seniors, Bob Casey should work to find a bipartisan solution to this serious challenge.”

Though there remains no front runner to take on the Senator, Casey’s eventual Republican opponent will almost certainly endorse Ryan’s budget, either specifically or in spirit. Newt Gingrich’s cautionary tale – the backlash he faced after criticizing the Ryan plan – demonstrates what happens to GOP candidates who stray from the party line on entitlements. Marc Scaringi, Casey’s only official opponent so far, has already voiced his support.

But there’s a reason entitlement programs are considered a third rail in American politics. Attack ads cluttered the airwaves in 2010 accusing Democrats and ‘Obamacare’ of cutting $500 million out of Medicare. It was one of the GOP’s most effective messages in 2010 and played a role in the party’s immense success.

Which message will carry the day in 2012 remains to be seen.

Frank Filkosky contributed to this report.