One day after the Memorial Day parades and barbecues ended, Senator Bob Casey held a press conference at the Goodwill Workforce Development Center in Pittsburgh to release a report outlining the high rate of joblessness among veterans in the U.S.

“The unemployment rate among veterans is unacceptably high, especially among those who served our country after 9/11 and have returned to civilian life,” said Casey. “This report underscores the need to improve and strengthen programs designed to guide our servicemembers toward successful careers after their brave service in the Armed Forces.” 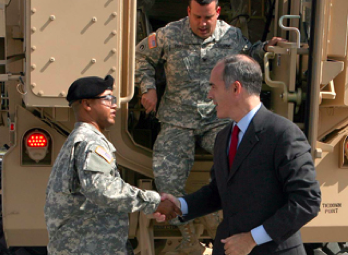 As the Chairman of the Joint Economic Committee (JEC), Senator Casey heads the 20 member bicameral Congressional Committee that researches, studies and informs Congress on national issues that strongly relate to the economic climate of the country; the current issue is veterans affairs.  Casey says he is strongly concerned with the amount of jobless veterans in our country, a number that grew after the terrorist attacks on September 11, 2001 as the JEC report, Meeting the Needs of Veterans in Today’s Labor Force, shows.

The number of unemployed veterans grew over the past 10 years; since September 2001, the Bureau of Labor Statistics reports that 1.7 million veterans have served in the U.S. Armed Forces.  The report found that 2.5 million service men and women have left service since that time. Many of those men and women reentered the civilian work force in 2008, a period with 7.3% veteran unemployment. In April 2011 the post-September 11th veteran unemployment rate reached 10.9%.  This unemployment rate is higher than the rate of unemployment for non veterans and all veterans.

As of last year, the Department of Labor reported that more than 1:5 Iraq and Afghanistan veterans were jobless. The report found that veterans from the post-September 11th era were likely to have the highest number of unemployment since these veterans were typically hired by private industries due to their specialized training in the armed services. However these jobs were most effected by the recession.

Although overall unemployment for veterans is high, the report notes that veterans labor force participation is strong and is crucial for not developing a disconnect between veterans in the labor force and non veterans.

Casey has introduced a bill, the Transition Assistance Program Audit Act, to tackle the problem. The measure would help veterans find jobs through a new modern approach to the career service program offered to service members during the transition period from service to the civilian labor force. The legislation is supported by the Reserve Officers Association (ROA), the Iraq and Afghanistan Veterans of America (IAVA), and the National Guard Association of the United States (NGAUS), which hope that their members can to work with the program created by the U.S. Department of Labor’s Veterans’ Employment and Training Service (DoL-VETS).  The bill proposes a third party audit of the program to ensure that the resources of the Department of Labor are up to date and can offer veterans more employment opportunities.

When describing this bill Senator Casey remarked, “this bill will empower the Department of Labor to continue to support our veterans in navigating the civilian workforce and preparing them for the jobs of today and the future by ensuring unbiased analysis informs future programming updates.”  This promotes a positive post-military life through education, health care, training and other services.

Similarly, the Hiring Heroes Act that Senator Casey co-sponsored in the beginning of May also works to provide leaving members of the military with jobs as they leave, making for an easy transition of employment.