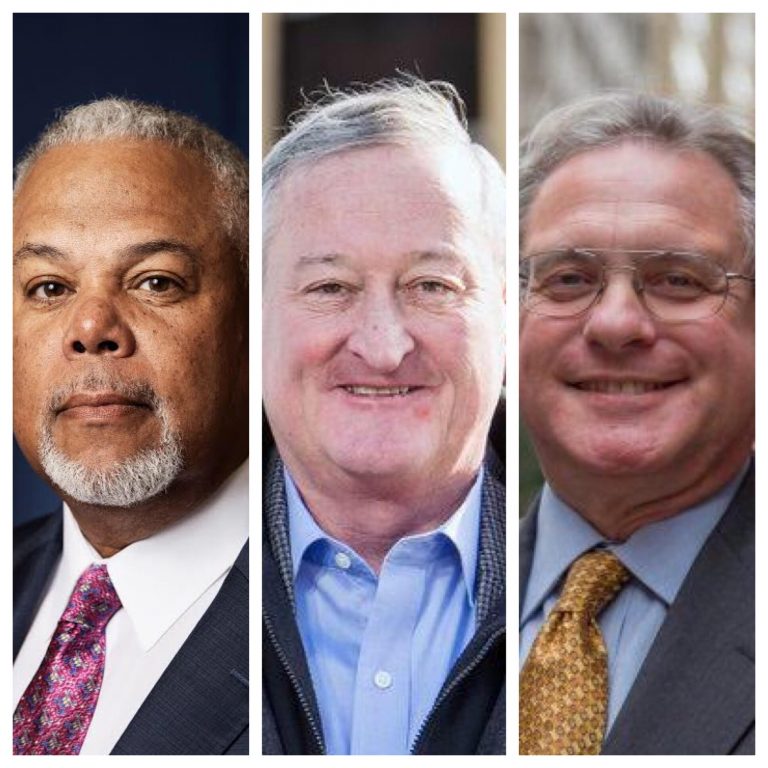 With just one week to go until the primary, Philadelphia Mayor Jim Kenney and challengers former City Controller Alan Butkovitz and state Sen. Anthony Williams (D-Philadelphia) participated in the lone televised debate of the Democratic primary.

Butkovitz and Williams criticized Kenney at nearly every chance possible, while Kenney boasted about his administration and avoided direct confrontation with his opponents for a majority of the hour long showdown, although tempers flared a bit towards the end.

The signature issue of Kenney’s term, the controversial sugary beverage tax, was criticized by both Butkovitz and Williams, as they painted the Mayor as a puppet to other figures who wanted the tax, but believe the current funding of pre-K programs it funds can continue without the tax.

“This is not a discussion about whether we believe in supporting our communities,” Williams said. “This is simply the creation of a New York giant, gentrifying loving, former New York Republican Mayor Michael Bloomberg.”

Bloomberg recently donated $1 million to a pro-Kenney PAC, Forward Together Philadelphia, which Williams continued to bring up in his opposition to the tax. The American Beverage Association, an opponent of the sugary beverage tax, has also invested more than $1.1M in it’s quest against defeating Kenney and the tax, according to WHYY.

Williams said he believes the city already has the funds to provide universal pre-K and afterschool programs.

Butkovitz criticized the Kenney administration’s budget and accused the Mayor of pushing the tax at the direction of indicted IBEW Local 98 head John “Johnny Doc” Dougherty.

“We all know why he did the soda tax,” Butkovitz said. “It was disclosed in the federal indictment of John Dougherty, it was a pernicious device to punish the Teamsters and people who held jobs who frankly supported Sen. Williams last time and didn’t have the wisdom to get on board the Kenney machine and with John Dougherty.”

Kenney defended his marquee legislation and said consumers don’t have to buy the product and the surplus should not be tapped into to pay for the pre-K program.

“I believe this tax is equitable because you don’t have to buy the product,” Kenney said.

He recalled his days on City Council and the surpluses that were not as high as the current surplus and said it was the safest bet to use the sugary beverage tax funding for the pre-K program.

“You never know when we’re going to have a recession,” Kenney said. “I want to be prepared for the recession and I also want to keep these programs going because they work and they create jobs too.”

A recent Philadelphia Inquirer poll, found that crime was the number 1 overall issue in the city. The first question out of the gates asked the candidates about the current rise in the homicide rate, while overall crime is trending down.

Butkovitz and Williams said they’s end stop and frisk as a means to stem the tide of gun violence and introduce other programs, while Kenney said his administration is working to get the homicide numbers down and criticized the state legislature and Pennsylvania’s law of being a “crazy gun state” prohibiting the city to do more to curtail the homicide rate.

The three candidates were asked later on about the job performance of Police Commissioner Richard Ross and District Attorney Larry Krasner which garnered different responses.

Kenney and Williams would not say that Krasner was soft on crime and lauded some of the reforms his office has begun, but that he needs to do a better job cooperating with victims. Butkovitz struck a different tone on the progressive DA saying having him in this role is like having “two public defenders” in the city.

When asked to give a letter grade to Ross and whether they’d keep him as Commissioner if elected, Butkovitz also provided a different answer from Kenney and Williams. Butkovitz gave Ross a “C” and would not commit bringing him on as Commissioner under his administration. Kenney gave Ross an “A” and said he’d keep him, while Williams would not provide a letter grade, but said he would keep him in his current role.

Kenney’s support for a proposed safe injection site also united Butkovitz and Williams in their platforms. The two challengers adamantly oppose the proposal, while Kenney seemed to carefully endorse a plan for a nonprofit to run the supervised safe injection site, while not providing specifics of where specifically they should be placed and said they city is studying the legality of the plan.

While Kenney has avoided many of the public forums throughout the campaign and didn’t directly engage with much of the criticism from his challengers during the debate, there was as instance in which Kenney and Butkovitz traded jabs toward the end of the hour long event.

Butkovitz, who lost his bid for a fourth term as City Controller in 2017 to Rebecca Rhynhart, said he often took on the influential figures in the city which could have hurt his chances and that there was an appetite to have more women in elected office and believes this race is different because Kenney’s term as Mayor is a “complete failure.”

Kenney rejected this notion and said that Butkovitz was “fired by the voters” for not properly auditing each city department.

During this heated back and forth, Williams interjected with saying, “I’m Anthony Hardy Williams and I’m running for mayor.”

The one major issue that the candidates agreed upon was the city’s current sanctuary city policy. They pointed their criticism at Trump and said this was a policy worth keeping.

The full debate from NBC10 can be found below.