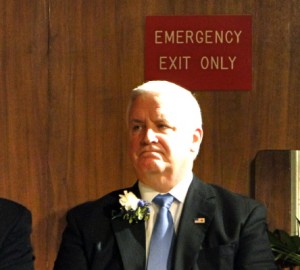 Tom Corbett’s window is closing. He’ll face voters in 18 months but has yet to show that he can improve his poor numbers, the latest survey from Franklin and Marshall finds.

25% rate his job performance as excellent or good, while 71% said he’s doing a fair or poor job. It’s a few points worse than Corbett’s performance rating in F&M’s February survey.

He was net negative among every demographic group surveyed, including Republicans (58% fair/poor vs. 39% excellent/good).

That’s the lowest of any Pa. Governor in the 20 years F&M has been keeping track.

The Center for Opinion Research at Franklin & Marshall College polled 526 registered voters from April 30 to May 5 via live interviews to landlines and cell phones. The margin of error is plus or minus 4.3%. 50% of respondents identified as Democrats, 37% identified as Republicans.

Senator Bob Casey (D) is in positive territory, viewed favorably by a margin of 43% to 22%. Pat Toomey (R) is also positive, 35% to 22%. It’s a 7 point bump from F&M’s February poll, a result which mirrors a Quinnipiac poll that showed a boost for him following his bipartisan push for more background checks on gun purchases.

But Toomey’s job performance is in less positive territory. 31% gave him excellent or good marks, versus 49% who said fair or poor.