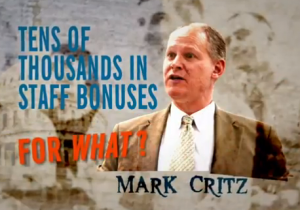 Pennsylvania’s most competitive congressional race is heating up by about half a million dollars.

Young Guns Action Fund is running an ad entitled “One of us” airing Friday which blasts Critz for government spending and his “common values” with President Obama.

The YG Action Fund is a super PAC dedicated to supporting those GOP congressional candidates designated as top tier challengers by the National Republican Congressional Committee (the NRCC’s program is called “Young Guns”). They (or an affiliated group) have targeted Critz before.

“Congressman Mark Critz used tens of thousands of our tax dollars on bonuses for his staff. For what? A review of Critz staff salaries from April 2011-September 2011 show almost every staffer received a $2,000 bonus in addition to their base salary,” the announcer accuses.

In its final 10 seconds, the ad’s announcer pivots to laud Rothfus as, “A husband, Dad, a man of faith. Rothfus understands us.”

“Keith Rothfus’ allies have launched another false, negative ad because they want to distract voters from the fact that Keith Rothfus is on the record supporting unfair trade deals that ship jobs overseas and he’s backed by wealthy special interest groups that want politicians like Rothfus to back off when it comes to taking on China,” he said.

He said that the “common values” accusation was clearly taken out of context. It comes from a statement given by White House Press Secretary Robert Gibbs right after Critz won his special election in 2010 by running against some of the President’s key initiatives (i.e. Obamacare).

“I doubt there are many in Congress that agree with each and everything that the President agrees on,” Gibbs said. “We have the luxury of enjoying a party with a big tent… there are common values that we enjoy as members of the same party.”

The 12th is Pa.’s number one destination for outside spending so far. While the YG Action Fund and the NRCC are on TV to whack Critz, SEIU, AFSCME, the DCCC and the House Majority PAC are on air smacking Rothfus.

Both candidates are also on TV.