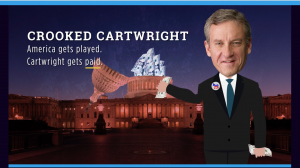 Rep. Matt Cartwright (D-Lackawanna) is a top target for Republicans in November. While a crowded GOP field fights to face the incumbent Democrat in the Trump-friendly 8th District, a super PAC aims to shape a narrative in the race.

The Congressional Leadership Fund, a GOP super PAC endorsed by House Republican leadership, debuted a new website, crookedcartwright.com. The allegation stems from a piece in the conservative Washington Examiner about a Cartwright bill that would significantly increase the amount of insurance liability coverage required for truck drivers and companies. Cartwright and his wife Marion Munley hold a financial interest in his wife’s family law firm, where she works as an attorney specializing in truck accident lawsuits.

Cartwright’s campaign fired back saying that the website and GOP efforts are a sign that they are “putting politics over people” and that safety on his constituents is at the heart of the bill.

“This cheap stunt exposes the whole sham for what it really is – politics over people. Over 4,000 Americans died in 2018 in large truck accidents, and northeastern Pennsylvania is home to two of the most truck-congested highways in America,” said Cartwright Campaign spokesperson, Colleen Gerrity. “I don’t think these Washington, D.C. insiders would find this so funny if they had to drive their families up and down 81 every day. It’s no wonder a dark money-fueled Republican front group would try to smear Congressman Cartwright with a phony ethics complaint – they would try anything because they know he has never, and will never, back down from taking on corporate interests that put profits over the safety of northeast Pennsylvanians.”

The Citizens Voice reports that the group that filed the complaint with the Office of Congressional Ethics is the “Foundation for Accountability and Civic Trust,” which the paper describes as “a government watchdog group with deep conservative Republican ties.”

The website also includes a graph showing Cartwright’s net worth increasing since being elected to office and videos of him avoiding questions about corruption published by the GOP super PAC.

Cartwright is one of three Pennsylvania Democrats that the group announced as targets on their initial 2020 list.